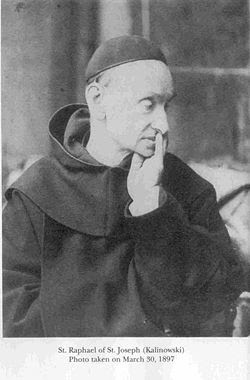 Raphael Kalinowski was September 1, 1835 Vilnius, Lithuania. He was a Polish Discalced Carmelite friar born as Józef Kalinowski inside the Russian partition of Polish-Lithuanian Commonwealth, in the city of Vilnius.He was also in the military. He was a teacher, engineer, prisoner of war, royal tutor, and priest. He was ordained as priest at Czerna in 1882 by Bishop Albin Dunajewski.He also founded a Carmelite Sisters convent in Przemyśl in 1884, and Lvov in 1888 .Who founded many monasteries around Poland after the suppression by the Russians. He died November 15, 1907 in Poland. He lived to be seventy two years old. He was beatified in 1983, Kraków, Poland and canonized 17 November 1991, St. Peter's Basilica, Rome by Pope John Paul The II. He was the first man to be so recognized in the order of the Discalced Carmelites, since Saint John of the Cross.

Prayer
God almighty you gave us St.Saint Raphael Kalinowski to be an example of a person of great sacrifice. May his life be an example to live by so we can make sacrifices for ourselves.We ask this through Christ our lord. Who lives reigns with you and the holy spirit one GOD forever and ever.
AMEN