The Dedication Of The Basilica Of St. John Lateran 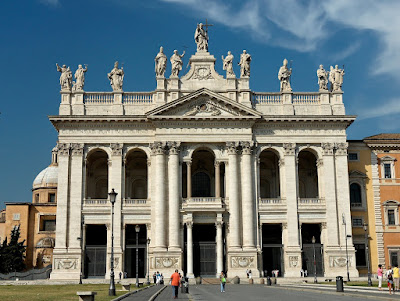 The anniversary of the dedication of the Lateran Basilica, which was erected by Emperor Constantine, has been observed on this day since the Twelfth Century. This feast was at first observed only in Rome but later in honor of the basilica, which is called the mother church of Christendom, the celebration was extended to the whole Latin Church. This action was taken as a sign of devotion to and of unity with the Chair of Peter which, as Saint Ignatius of Antioch wrote, "presides over the whole assembly of charity."

This Basilica is know for its many different works of art. It is known to have many Papal tombs/remains, but it also holds St. Helen's remains in a sarcophagus. By decree of Pope Clement XI the basilica added all 12 apostles made by 7 different artist.

Prayer
Father,
Each year we recall the dedication of this church to
your service.
Let our worship, always be sincere
and help us to find your saving love in this church.
Grant this through Christ our Lord.
AMEN.
Catholism God Italy November 9th The Basilica Of St. John Lateran