The Presentation of the Virgin Mary 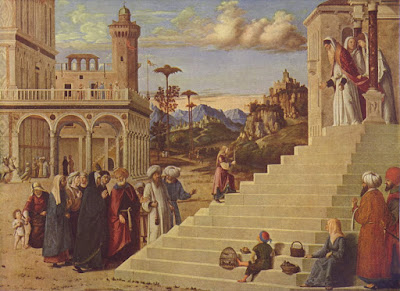 The feast is associated with an event recounted not in the New Testament, but in the apocryphal Infancy Narrative of James. According to that text, Mary's parents, Joachim and Anne, who had been childless, received a heavenly message that they would bear a child. In thanksgiving for the gift of their daughter, they brought her, when still a child, to the Temple in Jerusalem to consecrate her to God. Mary remained in the Temple until puberty, at which point she was assigned to Joseph as guardian. Later versions of the story (such as the Gospel of Pseudo-Matthew and the Gospel of the Nativity of Mary) tell us that Mary was taken to the Temple at around the age of three in fulfillment of a vow. Tradition held that she was to remain there to be educated in preparation for her role as Mother of God. This feast commemorates the dedication of the church of Saint Mary, which was built in Jerusalem near the site if the Temple. With Christians of the East, the Latin Church also recalls on this day the tradition according to which Mary as a small child was presented to the Lord by her parents (Ss. Anne and Joachim) in the Temple, where she remained until around 13 years old.

PRAYER
Lord Jesus Christ,
You chose the Virgin Mary to be your mother,
a worthy home in which to dwell.
By her prayers keep us from danger
and bring us to the joy of heaven.
Where you live and reign with the Holy Spirit forever and ever.AMEN.
God love November 21. Presentation of the Virgin Mary St. Anne and Joachim Temple Virgin Mary