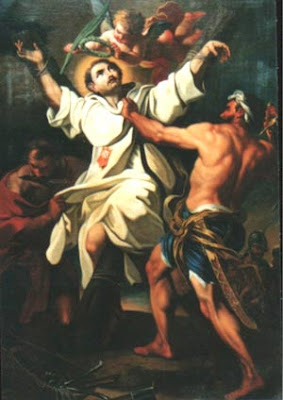 Saint Serapion of Algiers was born in Ireland in 1179. He was a Mercedarian friar who is venerated as a martyr by the Catholic Church, and as a proto-martyr by the Mercedarian Order. According to tradition, he was born either in Ireland or England and served in the armies of Richard the Lion-Heart and Leopold VI during the Crusades.
He then participated in the Reconquista, serving in the army of Alfonso VIII.
He met St. Peter Nolasco and became a Mercedarian in 1222.
The Mercedarians’ goal was to free Christian captives held by Muslim states, and Serapion offered himself as a hostage at Algiers in exchange for some Christian captives. When the ransom money did not arrive in time Serapion was killed. According to Christian tradition, he was nailed on an X-shaped cross and was dismembered. He died on November 14 1240 in Algiers.

Prayer
Father may the martyrdom of your proto-martyr of the order devoted to our mother of mercy. Be an example of strength in faith in you forever. We ask yhis in your name.
AMEN