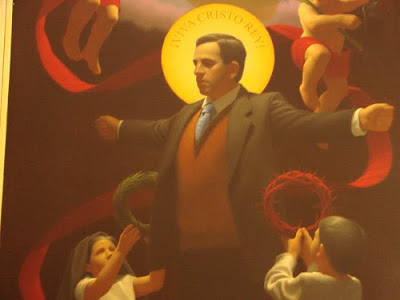 Miguel Agustin Pro was born in Guadalupe, Zacatecas, Mexico on January 13, 1891. He was the eldest son to Miguel Pro Sr. and Josefa Pro de Juarez. Pro belonged to the Society of Jesus(Jesuits), he study some time in Mexico up until the Persecution of the Catholics in Mexico, now known as the Cristero War. As a child he had many adventures with his 11 sibilings ;some of which died during infancy. Miguel had many talents such as playing the guitar, encouraging a public, speaking without fear, ETC. In 1914 Pro had to move from Mexico to California to study the religious life, due to the Anti-Catholic Government of Mexico. He later went to Europe to continue his studies, in Spain and Belguim. He was ordained on August 31st, 1925. Here is an exerpt from a letter he wrote after his ordination,"How can I explain to you the sweet grace of the Holy Spirit, which invades my poor miner's soul with such heavenly joys? I could not keep back tears on the day of my ordination, above all at the moment when I pronounced, together with the bishop, the words of the consecration. After the ceremony the new priests gave their first blessing to their parents. I went to my room, laid out all the photographs of my family on the table, and then blessed them from the bottom of my heart." Pro spent his first year in Belguim, to which he converted many of the Communist workers to the Catholic Faith. In the summer of 1926 Miguel was set to return to Mexico, along the way he stopped in Lourdes, France and managed to celebrate Mass at the Grotto. Pro arrived in Mexico in 1926, and was shocked to hear about the Anti-Catholic laws being enforced by Plutarco Elias Calles. Many new and absurd laws were proclaimed, such as the one that would fine a religious man/woman if seen wearing their habit outside the church wall, 500 pesos, to this many religious men and women began to wear disguises. 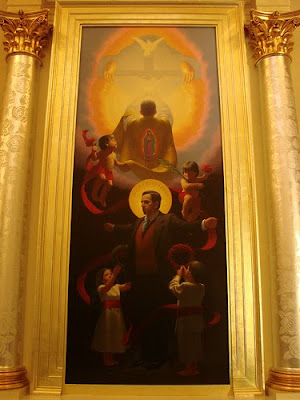 Fr. Pro disguised himself, but some people knew he was a priest and threatened to reveal him to the authorities. Many priest had to celebrate mass in secret and Fr. Pro was no exception, in his sweater he would carry unconsecrated host, which would later become the Body, Blood, Soul and divinity of Christ. In one case it was said that while celebrating the Act of Consecration Fr. Pro levatated. Father Pro was taken to prison and tried and later let free. But later on they accused him of trying to assisinate Alvaro Obregon. Calles wanted to have the execution of Fr. Pro photographed, in order to frighten the rebels, but had no effect. Before he died he forgave his killers and blessed them and said "May God have mercy on you! May God bless you! Lord, Thou knowest that I am innocent! With all my heart I forgive my enemies!". He was given his last wish which was to pray, the Troops agreed to let him pray, at this point he pulled out his crucifix and rosary and prayed. After a brief prayer he stood before the sharp shooters with his arms extended like Christ on the Cross. Before the firing squad were ordered to shoot, Pro raised his arms in imitation of Christ and shouted the defiant cry of the Cristeros, "Viva Cristo Rey!". The first shots missed him, but then a soldier shot him directly. Thus Father Miguel Agustin Pro was dead in this world but born in the Eternal Life of Christ. He was born in heaven on November 23, 1927. (Which in this Year of the Priest is an Indulgence day, if you go to mass.)
52 years after Fr. Pro's death Pope John Paul II visited Mexico and beatified him September 25, 1988. 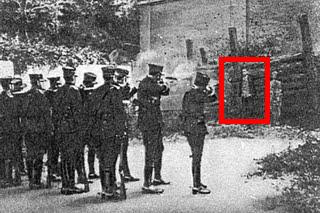 Prayer
Father may the life and martyrdom
of your Servant Blessed Miguel Agustin Pro
be an example to give our blood for your
holy catholic church. We ask this through Christ our lord and savior.
AMEN.
Prayer
Father with the life and death of Fr. Miguel Pro you have shown the world a true testimony of your unconditional love for your Beloved Church.
May his life be our example of true Sanctity and Martyrdom.
For your Blessed Servant Miguel Pro gave us a true example of how we can live like Christ, may our Prayers blend with his so that we may too give a valiant testimony of your word, love and faith.
AMEN.
Blessed Miguel Pro Cristero War Fr. Miguel Pro Jesuit martyr martyrdom Mexican November 23. Pope John Paul The II unconditional love