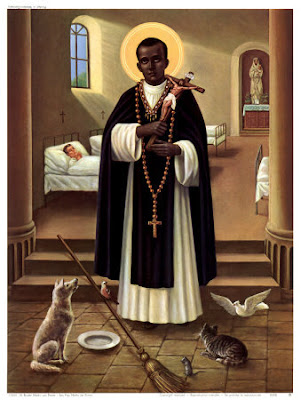 St. Martin was born as Juan Martin De Porres, who was born in Lima, Peru on December 9th in 1579, and was also the illegitimate son to Spanish nobleman and a black slave. He grew up in poverty; when his mother could not support him and his sister, Martin was confided to a primary school for two years, then placed with a barber/surgeon to learn the medical arts. This caused him great joy, though he was only ten years old, for he could exercise charity to his neighbor while earning his living. Already he was spending hours of the night in prayer, a practice which increased rather than diminished as he grew older. Until his death he would flagellate himself three times every night, for his own failings and for the conversion of pagans and sinners. At the age of 15 he asked for admission to the Dominican Convent of the Rosary in Lima and was received first part of their Third Order. His piety and miraculous cures led his superiors to drop the racial limits on admission to the Order, and he was made a full Dominican brother. It is said that when his priory was in debt, he implored them: "I am only a poor mulatto*, sell me. I am the property of the order, sell me please!" Martin was deeply attached to the Blessed Sacrament, and he was praying in front of it one night when the step of the altar he was kneeling on caught fire. Throughout all the confusion and chaos that followed, he remained where he was, unaware of what was happening around him. At age 24 he was given his habit and placed in the infirmary for the remainder of his life. It is said that he had immense patience for the sick were restless and he would calm them and care for them at all hours of the night, to this his superiors took great notice. Saint Martin also cared for the sick outside his convent, often bringing them healing with only a simple glass of water.
One day an aged beggar, covered with ulcers and almost naked, stretched out his hand, and Saint Martin, seeing the Divine Mendicant in him, took him to his own bed. One of his brethren, considering he had gone too far in his charity, reproved him. Saint Martin replied: “Compassion, my dear Brother, is preferable to cleanliness. Reflect that with a little soap I can easily clean my bed covers, but even with a torrent of tears I would never wash from my soul the stain that my harshness toward the unfortunate would create.”
In Lima their came a huge Leukemia epidemic which also struck the Convent of the Rosary which made many sick. They were then quarentined in another side of the convent, restrictions were heavy, doors were locked with guardsmen at them. But many said that even though the doors never opened St. Martin was always in there. Yet their were no other doors to enter nor windows. One day he found on the street a poor Indian, bleeding to death from a dagger wound, and took him to his own room until he could transport him to his sister’s hospice. The superior, when he heard of this, reprimanded his subject for disobedience. He was extremely edified by his reply: “Forgive my error, and please instruct me, for I did not know that the precept of obedience took precedence over that of charity.” The superior gave him liberty thereafter to follow his inspirations in the exercise of mercy.
St. Martin not only cared for the sick yet also he cared for the poor. He is always depicted with animals, the poor, the sick, and a broom. It is also said that he would sweep the convent from head to toe.
St. Martin was discriminated for a large part of his life yet he prevaild in the faith and reached a Catholic's dream Sainthood. Let us ask him for his patience and his love for others and to never let any obstacle come between our love for GOD and our brothers.

Prayer
Lord,
you led Martin de Porres by a life of humility
to eternal glory.
May we follow his example
and be exalted with him in the kingdom of heaven.
Grant this through Christ our Lord.
AMEN.
Catholism God love. November 3rd. Saint Sainthood San Martin de Porres St. Martin of Porres