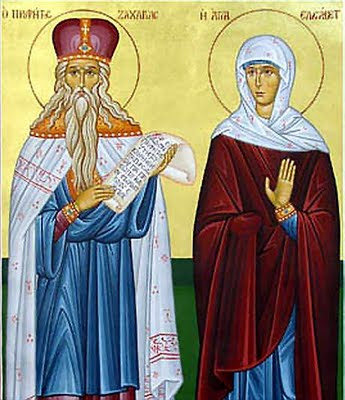 Elizabeth And Zacharias were born in the first century BC. Elizabeth was a cousin of the Virgin Mary. When Mary was three months pregnant with Jesus Elizabeth was six months pregnant with John The Baptist.When mary got to Elizabeth's house, Elizabeth said "Blessed are thou amongst women and blessed is the fruit of thy womb.""How could I deserve the visit of the mother of my Lord?""I heard your salutations and the baby jumped in my womb!"When Mary heard this she recited the Magnificat.During that time Zacharias had lost his voice. Zacharias was a Jewish priest he was blessing the altar when an angel told him he was going to have son. Zacharias didn't believe the angel because he was an elderly person. The angel told him his son was going to be named John. Three months later John The Baptist was born. A lot of people said the baby should be named like his father. After three months Zacharias finally spoke He said The baby would be named John. Elizabeth And Zacharias died in the first century AD. Zacharias is the patorn saint of Venice,Itlay.Elizabethis the patorn saint of pregnant women and the diocese of Fulda, Germany.

Prayer
Father almighty may Saints Elizabeth And Zacharias be our example to a better life to serve you and love you with all our heart we ask this through Christ Our Lord whom lives and reings with you one GOD forever and ever. AMEN
AD altar BC diocese of Fulda Elizabeth And Zacharias Germany God Itlay John The Baptist Magnificat patorn saint Venice Virgin Mary