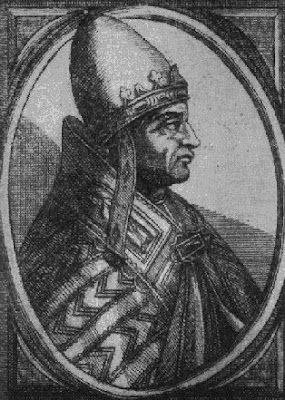 A Syrian by birth (the last pope to date born outside of Europe), he succeeded Gregory II in March 731. His pontificate, like that of his predecessor, was disturbed by the iconoclastic controversy in the Byzantine Empire, in which he vainly invoked the intervention of Charles Martel.
Pope Gregory III - Pontyfikats medal of the 8th century - obvers.
Pope Gregor III - Pontyfikats medal of the 8th century - reverse.Elected by popular acclamationy, he was the last pope to seek the Byzantine exarch's mandate. Gregory immediately appealed to the Byzantine Emperor Leo III to moderate his position on the iconoclastic controversy. When this elicited no response, Gregory called a synod in November 731, the latter decided to bring the Pope under control. This included appropriating papal territories, and transferring ecclesiastical jurisdictions to the Patriarch of Constantinople.
Gregory's support of the empire led him to help contribute to the recapture of Ravenna after it had fallen to the Lombards in 733. However, he also sought to fortify Rome and seek alliance with opponents of the Lombard monarch Liutprand and then from the Franks. He sent ambassadors to Charles Martel, who made no response.
Gregory promoted the Church in northern Europe - such as the missions of Saint Boniface in Germany and Willibald in Bohemia. He also bestowed palliums on Egbert of York and Tatwine, Archbishop of Canterbury. He also beautified Rome and supported monasticism.

Prayer
Father you gave us the Successor of
Saint Peter, Pope Gregory III to lead us
to you and your son. Let us get closer to
your son through the Eucharist.
AMEN