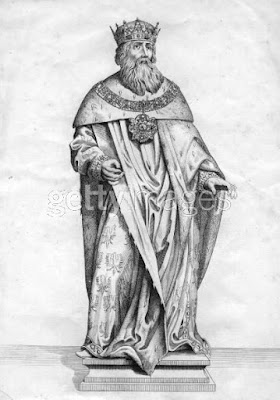 Leopold was born in 1073 Melk Austria. Saint Leopold III was the Margrave of Austria in 1095-1136. He is the patron saint of Austria, of the city of Vienna, of Lower Austria, and, jointly with Saint Florian, of Upper Austria. His feast day is November 15.
Leopold was the son of Margrave Leopold II and Ida of Formbach-Ratelnberg. He married twice. His first wife may have been one of the von Perg family, who died in 1105. His second wife was Agnes, the widowed sister of Emperor Henry V whom he had supported against her father Henry IV. This connection to the Salians raised the importance of the House of Babenberg, to which important royal rights over the margravate of Austria were granted. Also, Agnes had influential connections through her previous marriage, one of her sons being Conrad III of Germany.
Leopold called himself "Princeps Terræ", a reflection of his sense of territorial independence. He was considered a candidate in the election of the Kaiser of The Holy Roman Empire in 1125, but declined this honour.
He is mainly remembered for the development of the country and, in particular, the founding of several monasteries. His most important foundation is Klosterneuburg (1108). According to legend, the Virgin Mary appeared to him and led him to a place where he found the veil of his wife Agnes, who had lost it years earlier. He established the monastery of Klosterneuburg there. He subsequently expanded the settlement to become his residence.
Leopold also founded the monasteries of Heiligenkreuz, Kleinmariazell and Seitenstetten which developed a territory still largely covered by forest. All of these induced the church to canonize him in 1485.
Leopold also fostered the development of cities, such as Klosterneuburg, Vienna and Krems. The last one was granted the right to mint but never attained great importance.
The writings of Henry of Melk and Ava of Göttweig, which are the first literary texts from Austria, date back to Leopold's time.
He is buried in the Klosterneuburg Monastery, which he founded. His skull is kept in an embroidered reliquary, which leaves the forehead exposed; it also wears an archducal crown.
In 1663, under the rule of his namesake Emperor Leopold I, he was declared patron saint of Austria instead of Saint Koloman.
There is no school on November 15 (Leopoldstag) in Vienna and Lower Austria.
The brothers Joseph and Michael Haydn, each of whom sang in the choir of St. Stephen's Cathedral, both sang in that capacity at Klosterneuburg on this day. Joseph Haydn later became the more famous composer of the two. Michael Haydn later wrote a Mass in honour of Leopold, the Missa sub titulo Sancti Leopoldi.
His patronages are Austria; Vienna; Lower Austria; jointly with Saint Florian, of Upper Austria.

PRAYER
Father may the crown of one of your holy kings,help us during our lives. May St. Leopold III be an example to live by. We ask this through Christ our eternal and holy king. Who lives and reigns forever and ever.
AMEN