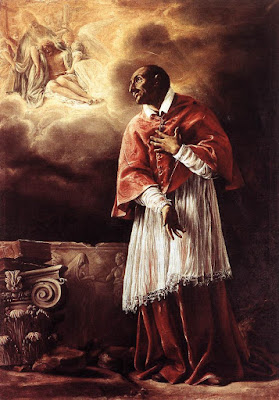 Charles was born in Arona, Italy in 1538. He came from a very renowned family the Borromeo Family, his father was the count of the region and his mother was the sister of Pope Pius IV, meaning he was the nephew of the Pope. When Borromeo was about twelve years old, his uncle Giulio Cesare Borromeo, resigned to him an abbacy, during this time he studied the charity towards the poor. He studied the civil and canon law at Pavia. In 1554 his father died, and although he had an elder brother, Count Federigo, he was requested by the family to take the management of their domestic affairs. After a time, he resumed his studies, and in 1559 he took his doctoral degree. In 1560 his uncle, Cardinal Angelo de' Medici, was raised to the pontificate as Pope Pius IV. Pope Pius IV then named Borromeo to the post of Cardinal of Romagna and the March of Ancona, and supervisor of the Franciscans, Carmelites and Knights of Malta. Borromeo declined the proposal. He worked even harder for the welfare of the church. Owing to his influence over Pius IV, he facilitated the final deliberations of the Council of Trent. He took a large share in the creation of the Tridentine Catechism. After the death of his uncle Pope Pius IV he helped out all he could at the conclave, and played a some what major part in the counter reformation in Italy. At the Council of Trent the church decided to make the temple interiors much simpler and not very distracting, so Charles got rid of almost everything, in order to make the church look less distracting to the followers. When the Bubonic Plague came to Milan, he took great part in trying to help the families whom had lost a relative and he also helped bury them. Even in the church Charles had many enemies, some of which shot at him in the Chapel and also being attacked by a Jesuit Confessor. Charles fell ill with an intermittent fever and died in Milan on November 3rd. St. Charles Borromeo would always wear a noose to show that he was a sinner. Even though St. Charles died in 1584 his body is still incorrupted after 425 years, let that be a symbol of GOD still living within the dead.

Prayer
Father,
keep in your people the spirit
which fillied Charles Borromeo.
Let your church be continually renewed
and show the image of Christ to the world
by being conformed to his likeness,
who lives and reigns with you and the Holy Spirit,
one GOD, forever and ever. AMEN
archbishop of milan. cardinal Catholism God Heaven incorruptables love. November 4th Saint Sainthood St. Charles Borromeo