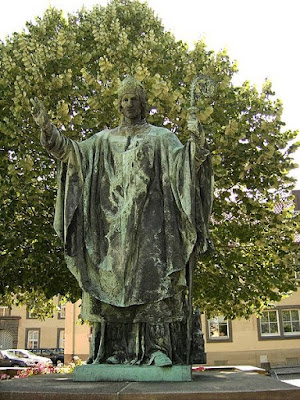 Bernward of Hildesheim (b c.960; d Hildesheim, 20 Nov. 1022). German ecclesiastic and art patron. He was abbot of the Benedictine monastery at Hildesheim in Saxony from 993 until his death, and for the church of St Michael there (begun 1001) he commissioned the famous bronze doors and a great bronze column, probably intended to support the paschal candle. They are important not only for being among the outstanding European works of their period, but also for marking the revival of the cire-perdue technique of casting, which had virtually disappeared since the time of Charlemagne. A contemporary biographer records that Bernward himself practised metalwork and manuscript illumination, but no work can be attributed to him. He was canonized in 1192 and is a patron saint of goldsmiths.

PRAYER
Lord you have blessed your beloved servant Bernward
with the gift of Sainthood, let us also enter your kingdom, and also let us answer the calling of Sanctity
AMEN
bishop of hildesheim Germany love November 20th Saint Bernward Sainthood