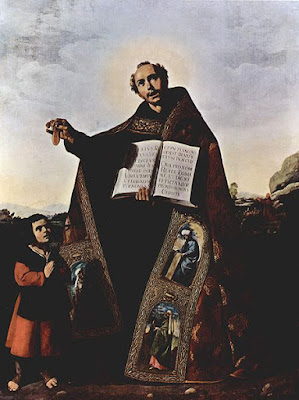 Saint Romanus of Antioch is venerated as a martyr. In 303 at the beginning of the Diocletian persecution, a deacon called Romanus in Palestine suffered martyrdom at Antioch. He was taken prisoner, was condemned to death by fire, and was bound to the stake however, as the Emperor Galerius was then in Antioch. Romanus was brought before him. At the emperor's command Romanus' tongue was cut out. Tortured in various ways in prison he was finally strangled.

Eusebius speaks of his martyrdom in De martyribus Palestin.Relates other details and gives Romanus a companion in martyrdom, a Christian by name Barulas. On this account several historians, among them Baronius, consider that there were two martyrs named Romanus at Antioch, though more likely there was but the one whom Eusebius mentions. Prudentius has introduced legendary features into his account, and his connection of the martyrdom of Barulas with that of Romanus is probably arbitrary.

The feast day of St. Romanus is observed on 18 November Paul Allard, "Histoire des persécutions", IV, 173 sq. Quentin, "Les martyrologes historiques" Barulas, like St. Quiricus, is venerated as a child-martyr. The church of San Román in Seville is dedicated to Romanus. Prudentius wrote a 1140 line hymn to Romanus, the Romane Christi fortis.

PRAYER
Father may the martyrdom of St. Romanus of Antioch be an example to love you each day,even if we have to give our blood to defend your and your holy mother's name.We ask this through Christ our lord savior.Who lives and reigns and the holy spirit on GOD forever and ever.
AMEN