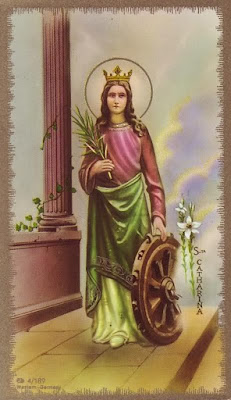 Catherine was born 282, Alexandria, Egypt. Catherine was was virgin. She was very beautiful. Once the Emperor Maximinus of Rome was taking over Egypt, he saw how beautiful she was. He want her to marry him. He asked her to marry him she refused because, she took her vows of virginity. So he got angry he sent her to be tortured. She was imprisoned and the people who visited her converted when she spoke to them. The emperor was frustrated, so he had tortured on the breaking wheel. Once she touched the wheel the wheel broke it self. Finally she was beheaded. She died on earth but born in the glory of Christ 305, Alexandria, Egypt. She has many patronages here are some of them educators, girls, jurists, knife sharpeners, lawyers,and librarians. She is part of the fourteen holy helpers. 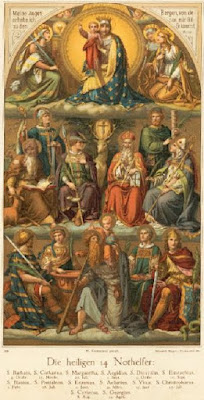 It dosen't say when or by who she was canonized.

Prayer
Father may the blood of Catherine of Alexandria
be a seed for us to be better christians
so we too can give our blood for you.
We ask this through Christ our lord.
AMEN
Alexandria Beheaded canonized converted Egypt Emperor Maximinus Fourteen Holy Helpers God Rome The Breaking Wheel