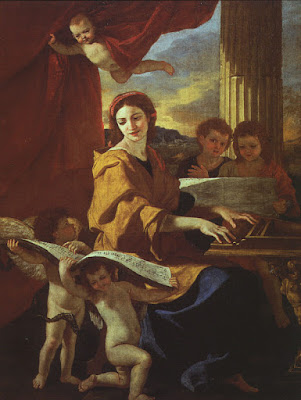 Born in second century AD Rome. Cecilia was a marvelous musician. Cecilia was a virgin and also beautiful. Cecilia was to be wed at the age of thirteen. Every young man wanted to marry her. But her parents chose who she would marry. They chose a man named Valerian. In the evening of her wedding-day, with the music of the marriage-hymn ringing in her ears, Cecilia renewed the vow by which she had consecrated her virginity to God "Pure be my heart and undefiled my flesh; for I have a spouse you know not of—an angel of my Lord." She, her husband,and her brother were arrested.Her husband,and brother were killed first."Do you not know," was her answer to the threats of the prefect, "that I am the bride of my Lord Jesus Christ ?" The death appointed, for her was suffocation, and she remained a day and a night in a hot-air bath, heated seven times its wont. But "the flames had no power over her body, neither was a hair of her head singed." The lictor sent to dispatch her struck with trembling hand the three blows which the law allowed, and left her still alive. The hot-air bath didn't work so they stabbed her three times she didn't die until she received holy communion. She died 177 AD.


PRAYER
Father may saint Cecilia's life be an example to be pure of all sin.
That we be so faithful in you to give our lives for you.
We ask this through Christ our lord.
AMEN