The Feast of Our Lady of the Miraculous Medal 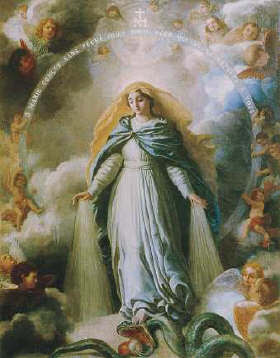 The Miraculous Medal was a medal invented by Saint Catherine of Labouré, after the Virgin Mary appeared to her. The virgin told her that times of evil were in France and in the world. On November 27 1830 Catherine reported the Virgin had appeared again in an oval frame, standing upon a globe, wearing many rings of different colors, most of which shone rays of light over the globe, and stepping on a head of a serpent. On the frame it said in Latin Ô Marie, conçue sans péché, priez pour nous qui avons recours à vous. Meaning in English O Mary, conceived without sin, pray for us who have recourse to thee. Catherine saw the frame rotate there was a cross with a letter M, surrounded by twelve stars, and had the Sacred Heart of Jesus and The Immaculate Heart of Mary. Catherine asked why some of the Virgin's rings were not shedding light.The Virgin said those were graces people forgot to ask for. The Virgin asked to take the image to the priest. So they can put on medallions so the people who wore it would receive great graces. The priest took the information to the archbishop without reavealing Catherine's name. The request was approved and medallions began to be produced. Those who wore the medal felt that they had received great blessings, and the medal came to be referred to as the "Miraculous Medal". 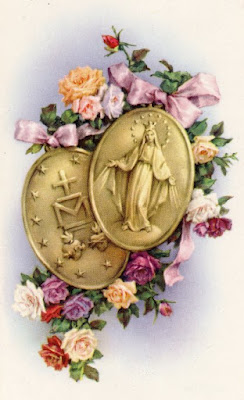