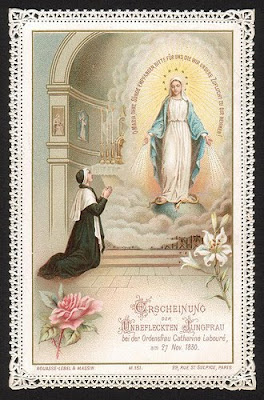 On July 18, the first apparition occurred in the community's motherhouse. St. Catherine beheld a lady seated on the right side of the sanctuary. When St. Catherine approached her, the heavenly visitor told her how to act in time of trial and pointed to the altar as the source of all consolation. Promising to entrust St. Catherine with a mission which would cause her great suffering, the lady also predicted the anticlerical revolt which occurred at Paris in 1870.

On November 27, the lady showed St. Catherine the medal of the Immaculate Conception, now universally known as the "Miraculous Medal." She commissioned St. Catherine to have one made, and to spread devotion to this medal. At that time, only her spiritual director, Father Aladel, knew of the apparitions. Forty-five years later, St. Catherine spoke fully of the apparitions to one of her superiors. She died on December 31, 1876, and was canonized on July 27, 1947. Her feast day is November 25.
Her body is still incorrupt.

PRAYER
Saint Catherine Labouré, you were the chosen confidant of the Blessed Virgin Mary. She revealed to you her desire that her children wear the Miraculous Medal as a mark of their love for her and in honor of her Immaculate Conception.
Intercede for us, that we may follow our heavenly mother's desires. Ask that we may receive those special graces which flow from her motherly hands like rays of light.
AMEN
God miraculous medal November 25 St. Catherine Labourne