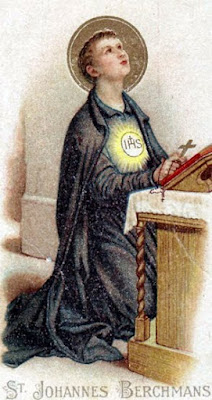 St. John Berchmans was born the eldest son of a shoemaker in 1599 at Diest, Belgium. At a very young age he wanted to be a priest, and when thirteen he became a servant in the household of one of the cathedral canons at Malines. After his mother's death, his father and two brothers followed suit and entered religious life. In 1615 he entered the Jesuit college there, becoming a novice a year later. In 1618 he was sent to Rome for more study and was known for his diligence and piety, and his stress on perfection even in small things. That year his father was ordained and died six months later. John was so poor and humble that he walked from Antwerp to Rome. He died at the age of 22 on August 13. Many miracles were attributed to him after his death; he was canonized in 1888 and is the patron saint of altar boys.
Although he longed to work in the mission fields of China, he did not live long enough to permit it. After completing his course work, he was asked to defend the "entire field of philosophy" in a public disputation in July, just after his exit examinations. The following month he was asked to represent the Roman College in a debate with the Greek College. Although he distinguished himself in this disputation, he had studied so assiduously that he caught a cold in mid-summer, became very ill with with an undetermined illness accompanied by a fever, although some think it now to have been dysentery, and died a week later. He was buried in the church of Saint Ignatius at Rome, but his heart was later translated to the Jesuit church at Louvain.
So many miracles were attributed to him after his death at the age of 22, that his cultus soon spread to his native Belgium, where 24,000 copies of his portrait were published within a few years of his death. He was known for his devotion to the Blessed Sacrament and to Our Lady, to whom he composed a Chaplet in honor of her Immaculate Conception.
One of his miracles happened at the Academy of the Sacred Heart, Grand Coteau. He appeared to novice Mary Wilson. When the Academy opened a boys division in 2006, it was named St. John Berchmans School.

PRAYER
Saint John Berchmans, my most loving patron, seraph of charity, I rejoice with you at the ardent fire of chairty, which kept your pure and innocent heart always at peace and united to God; I humbly pray thee, obtain for me such ardor of divine love that it may remove from my heart every inordinate earthly affection, destroy my evil tendencies, and cause me in all my actions ot be prompted by the purest intention: All for the greater glory of God!
AMEN.
altar server IHS Jesuit love November 26. Sainthood seminarian st.john berchmans