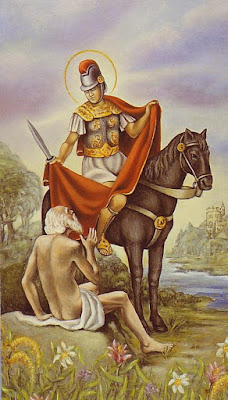 Martin was born in Savaria, Pannonia(which is now Hungary) in the year of 316. His father was part of the Roman Army, he was stationed in what is now Pavia, Italy; where Martin grew up. At the young age of 10 Martin went against his parents' wishes and enlisted in catechism to receive baptism. Since his father was a part of the Roman Army, at age 15 Martin had to enlist into the Calvary division. In the year 334 he was stationed in what is now Amiens, France.
While in Amiens, Martin and his soldiers were making their way through the city, when they came to the gates he saw a beggar, at his Martin cut his cloak in half and gave the half to the beggar. That very same night Martin had a dream, in his dream he saw Jesus the half of the cloak he had given the man. Christ also said to his angels "This is Martin, a Roman soldier, who is not baptized but still comes to me." Also when Martin was asked why he had done that act of charity, he said "I have seen the face of Christ in this poor beggar." At age 18 Martin was baptized; some believe due to the dream he had. Martin remained in the Military another 2 years and then he decided to pursue the higher calling in the faith. He renounced the Roman Military and said "I am a Solider of Christ, for this I cannot fight any longer." He was charged with cowardice and jailed, but in response to the charge, he volunteered to go unarmed to the front of the troops. His superiors planned to take him up on the offer, but before they could, the invaders sued for peace, the battle never occurred, and Martin was released from military service. In the year of 361 Martin joined a monestary in one of the first Gaul's in France. While preaching in Gaul he would always say "The memory of these apostolic journeyings survives to our day in the numerous local legends of which Martin is the hero and which indicate roughly the routes that he followed." 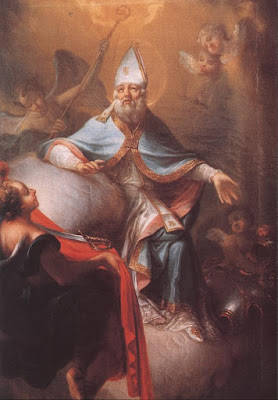 Ten years after his Priestly Vocation he was then named Bishop of Tours. While Bishop of Tours Martin destroyed many pagan temples and altars which tainted the Christan village. In the year after his appointment as Bishop he founded the Abbey of Marmoutier in 372. St. Martin is also attributed with bringing the dead back to life, he did so with a Catechumen, he had brought the boy back after 3 days of death.

Prayer
Father Almighty in this year being the Year of the Priest,
let us be guided by the spirit of St. Martin of Tours, a most outstanding conversion from a military life to being priest then Bishop of Tours.
Let us also share what we have with those in most need,
let us also see Your Divine face in others.
May we not judge, and give unconditional love to all.
We Ask this through Christ Our Lord, due to his unconditional love for all he sacrificed himself on the Cross.AMEN.
Ancient Roman Empire Bishop of Tours Conversion France Gaul. love November 11th. God St. Martin of Tours