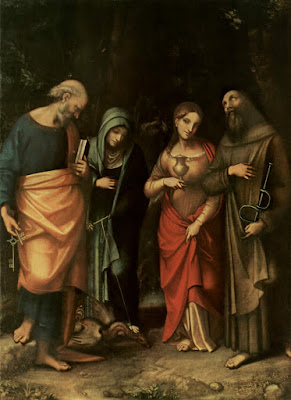 St. Leonard was born in France sometime during the 5th century and died in the half way through the 6th century. He was part of the nobelman of King Clovis I. A Frankish noble, Leonard was converted by Remigius, bishop of Rheims in the 6th century. Through this Clovis he was able to liberate many of the prisoners. He then became a hermit in Noblac in the forest of Limousin where he made a cell for himself. One day Clovis and his pregnant wife were out hunting, and through the prayers of St. Leonard she gave birth in his hermitage cell. To this Clovis was very greatful, to the extent of giving him the land surrounding the area to build a monastery. According to legend, prisoners who invoked him from their cells saw their chains break before their eyes. Many came to him afterwards, bringing their heavy chains and irons to offer them in homage. A considerable number remained with him, and he often gave them part of his vast forest to clear and make ready for the labours of the fields, that they might have the means to live an honest life.


Prayer
Lord you gave St. Leonard the grace of letting people into freedom,
please let us be set free through his intersession let us be born again in the new light of Christ our Lord.AMEN.
Catholism God November 6th. Love Sainthood