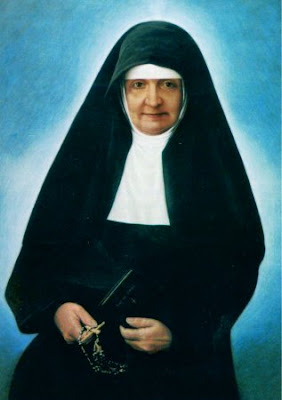 Maria Bernarda (of first name: Verena) was born and baptized in Auw (canton of Aargau, Switzerland) on May 28, 1848. It was the fourth daughter of Henry and Catherine Butler, humble peasants and practicing Catholics.

At the end of basic school education, was devoted to domestic chores and work in the field. In his youth entered a nunnery. Feeling that God called her to live in that place, returned to her parents, where, our work, prayer and apostolate, continued to feed his vocation until, on November 12, 1867, at 19 years old, entered the Franciscan Monastery of Mary Help of Christians, in Altstätten (Switzerland). On May 4, 1868 took the Franciscan habit, taking the religious name Maria Bernarda of the Sacred Heart of Mary. He made his religious profession on October 4, 1869.

Noted for his profound virtue and his human qualities, therefore, soon to be appointed master of novices and, later, superior service, who served until his departure for missions.

When Archbishop Peter Schumacher, Bishop of Portoviejo (Ecuador), wrote recounting the total abandonment in which people lived in those lands and offering his diocese as a field missionary, Mary Bernard was convinced that this invitation was a clear call from God proclaim the Gospel and to found a monastery home Altstätten subsidiary of Ecuadorian land. After overcoming initial resistance from religious leaders and papal permission to leave the monastery, June 19, 1888, he went with six companions, to Le Havre, France, where he sailed the seven bound for Ecuador.

That way, intended as only the beginning of the founding of a missionary branch of Swiss monastery, was, in fact, the beginning of a process that made Maria Bernarda founder of a new institute, the Congregation of the Franciscan Missionaries of Mary Help.

When they arrived in Ecuador, the bishop assigned to the seven religious Chone population, rather difficult and spiritually abandoned, which had about 13,000 inhabitants. He based his prayer missionary activity, poverty, fidelity to the Church and the exercise of the works of mercy. Were responsible for the education of children and youth, preaching the Gospel, enlivened the liturgy, visiting and attending the sick and the poor.

The seed shed by this great woman germinated and bore fruit. There were several houses subsidiaries in Ecuador. But the work was also marked by the mystery of the cross: absolute poverty, hot climate, uncertainties and difficulties of all kinds, were added to a misunderstanding by some Church authorities and the separation of the institute of some of its first founding sisters out of Ecuador.

In 1895, Mother Maria Bernarda and more than 15 sisters had to flee to Ecuador, because of a violent persecution against the church. In the port of Bahia sail for Colombia. During the crossing received an invitation from Archbishop Eugenio Biffi, Bishop of Cartagena de Indias, to work in his diocese. On August 2, 1895 arrived at the port of Cartagena. Biffi the paternally attended Bishop and assigned as a residence a women's wing of the hospital, called Obra Pia, where Maria Bernarda died years later.

The number of sisters founded the congregation grew and houses in Colombia, Austria and Brazil. Bernarda's mother remained seasons with the sisters in various places, shared with them his work and his life was a living example of evangelical simplicity, edified and encouraged them all. Attended with tenderness and mercy to all those in need in the soul or body, but his favorites were the poor and the sick. Praying, exhorting, evangelizing with amazing writing and delivery and intensity.

He directed his congregation, for 32 years. And when he resigned with gratitude and humility to the service, the sisters continued encouraging his example, his word, and his many writings, which are a source of doctrine and spiritual fruitfulness.

Two miracles have been expressly recognized by the Catholic Church, attributed to the intercession of Mother Maria Bernarda Butler, who served first, for the beatification and then canonization. It should be noted that the Church asks in these cases the official testimony of a medical board, which confirms that there is no scientific explanation for the healing.

The miracle took for her beatification occurred in 1969: the small Liliana Sanchez, who by then had only 15 days old, showed a loss of the bones of the cranial vault and was going to die in the short term. A religious congregation, Sister Filomena Martinez, the mother gave the girl a relic of Mother Bernarda and ninth. The lady put the relic in his daughter's head and prayed. In the overnight, there was a complete bone regeneration, verified by doctors.

Moreover, in 2002, Mirna Khazim Correa, a doctor of 29 years old Cartagena, atypical pneumonia complicated by bilateral pleural effusion and respiratory distress syndrome (ARDS). Despite the medical and pharmacological treatments did not improve and on July 5 was completely hopeless, connected to machines, while their vital signs were declining.

As he did at the time the girl's mother Liliana Sánchez, Mirna's mother put on her daughter's head as a relic of Blessed Maria Bernarda and called all day healing. Witnesses refer to prayer joined the staff of the intensive care unit.
The surprise came the day after, when the patient noted an improvement in general, which intensified with the passage of days, leaving no sequelae in the lungs after a picture of extreme gravity.

Several doctors testified Health Center: "No explanation of that natural or clinical cure. What we expected so complicated in the table of Dr. Mirna was death. The recovery was surprising. "

On July 6, 2007, Pope Benedict XVI authorized the promulgation of the decree on the miracle, which was the last step in the process now will end with the canonization of Blessed Mother Maria Bernarda Butler.

PRAYER
We bless you, Lord,
because you chose to Saint Maria Bernarda,
to make this your merciful love
and cooperate in the extension of your Kingdom.
Grant us the graces for their
intercession we ask,
make his life example
help us grow in goodness
service and love of the brethren.
Says, Lord, on us,
faith, hope and charity.
Amen