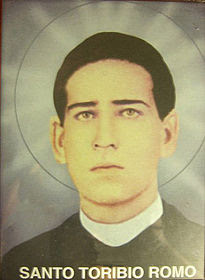 Toribio was born April 16, 1900 in Santa Ana De Guadalupe, Jalostotitlán, Jalisco, Mexico. He was baptized April 18, 1900 two days after he was born. He was baptized by Fr. Miguel Diaz Orozco. In August of 1901 Toribio was confirmed by Francisco Campos Bishop of Tabasco. Toribio was part of a very religious family. In a special way his sister Maria took care of him and inspired Toribio to the Religious life of a Priest. When he was seven one Easter morning he received his First Holy Communion. When he was nine his parents let him go to Jalostotitlán where Toribo attended school named Escuela De Rayitos. In this time he was an altar server in the church of La Santisima Virgen De la Asuncion, who he prayed to all his life. When the bells rang for Mass at 6 AM Toribio accompanied by his sister; he assisted in the Holy Sacrifice of Mass, where Toribio borrowed his service as an altar server with great devotion. Before returning to school at night Toribio went to visited the blessed sacrament. In 1912 he entered the Auxiliary Seminary in San Juan De Los Lagos. He was a very playful and happy seminarian who loved to joke around. When he was established in San Juan, Toribio and other seminarians formed the A.C.J.M. Toribio was a very loved seminarian but there was people who hated him; once they even tried by shooting him in an alley. Luckily Toribio did not die. Being President of the A.C.J.M. it corresponded to him to give the Welcome to Archbishop Francisco Orozco Jimenez whom which he had received his first holy orders. When Toribio was on vacation he went to his land of Santa Ana De Guadalupe he gave catechism to all the children. In 1920 we has moved to the Auxiliary Seminary of Guadalajara to continue and concluded his studies in the space of two years. On August 7, 1921 he went up one more step to becoming a priest; that day he became a sub-deacon. From that day forward he lived a more radical life and greater offering by visiting the Blessed Sacrament daily. September 3, 1921 he became a full deacon. Three months later Toribio and four other deacons took his vows of obedience. In 1922 Fr. Toribio was ordained a preist . On January 5, 1922 Fr. Toribio gave his first mass a priest. He primarily emphasized the catechesis. He underwent severe trials, however, as he was ordered by the government when the Cristero War began in 1927 to confine himself to his residence and was not allowed to pray the Rosary in public or to say Mass. A man of intense prayer, Fr. Toribio carried out his pious works in an exemplary manner with emphasis on examination of conscience, meditation, spiritual exercises and visits to the Holy Sacrament. He always demonstrated a great spirit of faith, a certainty in hope of reaching Heaven, and a compassion that moved him to suffer along with others (to the point of depriving himself of his own basic necessities). Obedience and desire shone in him, he was austere, quiet and sometimes troubled. He was ready to die for God, but he did feel fear and asked for God’s grace and strength. In 1927 he was transferred to Tequila for his safety. He set up residence in a factory, and his sister, María, and brother, Román, (also a priest) came to live with him. On Friday, February 24th, 1928, he spent his day organizing the parish registry. Two days before he had sent his brother away for safety. Fr. Toribio finished his work at 4:00am on February 25 and decided to sleep a little. An hour later the government troops arrived and broke into the bedroom where Fr. Toribio was sleeping. One soldier shouted: “Here is the priest, kill him!” He said, “Here I am, but do not kill me.” One soldier fired, and Fr. Toribio rose from his bed and took a few steps until a second bullet caused him to fall into the arms of his sister, who cried in a loud voice: “Courage, Father Toribio...merciful Christ, receive him! Long live Christ the King!” He is the patron saint of Mexican migrants, border crossers. He was Beatified November 22, 1992 by Pope John Paul II. He was Canonized May 21, 2000 by Pope John Paul II.
Archbishop of Tabasco catechesis Cristero War Deacon martyr May 25 Mexico Plutarco Elías Calles Pope John Paul II Priest Saint Sub-Deacon