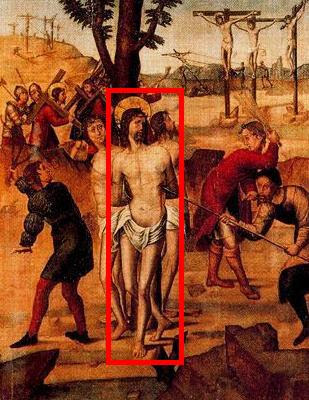 Saint Agathius also known as Achatius or Acacius of Byzantium. was a Cappadocian centurion of the imperial army. He was arrested for his faith on charges by Tribune Firmus in Perinthus, Thrace, tortured, and then brought to Byzantium where he was scourged and beheaded, being made a martyr because he would not give up his Christian Faith. Constantine the Great built a church in his honour. His relics were translated ca. 630 to a spring at Squillace, close by the Vivarium, the monastery founded in the previous century by Cassiodorus in the heel of Italy. He was known in Squillace as San Agario. A relic of his arm was brought to Guardavalle in 1584 by the bishop of Squillace, Marcello Sirleto, hence Agathius' patronage of this city. Relics from Squillace were also brought to Cuenca and Ávila in Spain, where he is known as San Acato.
Constantine Constantine the Great Fourteen Holy Helpers Holy Roman Empire martyr May 8. Roman Centurion Roman Soldier Saint Agathius