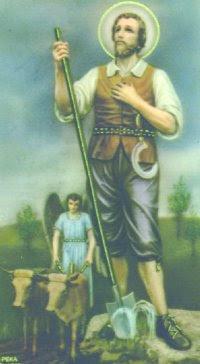 Isidore was born in Madrid April 4 1082. He lived humbly. Because of the Arabic invasions he moved to a small village near Seville. A little after he moved he got married to Maria De la Cabeza, who was also declared a saint. Around 1109 he returned to Madrid and worked for a rich family. During that time his only son Juan was born. His boss told him he can not go to daily mass. His neighbors accused him to his boss that he would leave work to hear mas; but Isidore responded to him "I know sir,that I am your servant; but but I have another calling, the one of service and obedience." His life as a laborer was a good one. He also demonstrated his devotion to Saint Mary Madelene. One day he went to work very early. That morning he had gone to mass. the other worker saw he was not there so they all left. Isidore got there but saw no one. He did four times the work; his work and three others work. He started to pray when two angels came and helped him work. His boss was going out side when he saw the angels; he asked "Who are these men who are here with you?" Isidore responded "I have seen no one. I did not ask for help only to God every morning in holy mass." His boss saw that these "men" were angels sent by God to help his servant, in return for hearing mass very deeply. He did many miracles during his life; like when he squeezed water out of a rock to give to the thirsty. Or when a boy fell in a well and everybody prayed so the boy could get out and he made the water rise up so the boy can float up to the surface. Or the time he and his co-workers were thirsty and he touched the ground and water came from the ground. The plantations he worked on were incredibly abundant and he would give crops to those in need. That's how he lived with his son and wife. Until he died in 1172. He died at 90 years old. A long time before he died he was already declared a saint. He was canonized by Pope Gregory XV and his wife was proclamed a saint 1752.
angels Madrid May 15 Pope Gregory XV Saint Saint Isidore Laborer Saint Maria de la Cabeza Saint Mary Madelene Seville Spain