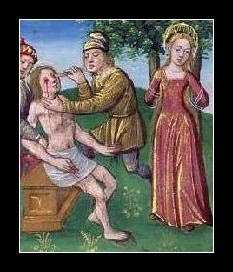 Their legend states that Victor was a Roman soldier of Italian ancestry, serving in the city of Damascus in Syria during the reign of Emperor Antoninus Pius. He was tortured -including having his eyes gouged out- by a commander named Sebastian.

While he was suffering from these tortures, the sixteen-year old spouse of one of his brothers-in-arms, named Corona, comforted and encouraged him. For this, she was arrested and interrogated. According to the passio of Corona, which is considered largely fictional, Corona was bound to two bent palm trees and torn apart as the trunks were released.Victor was beheaded in Damascus in 160 AD. Other sources state that they were husband and wife.
martyrs May 14. Sebastian St. Corona St. Victor Sts. Victor and Corona