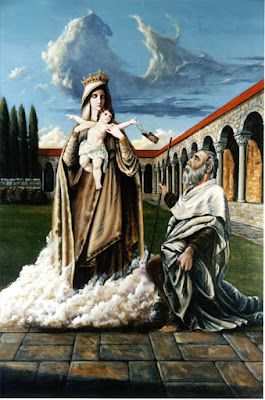 Saint Simon Stock was born of one of the most illustrious Christian families of England, at the castle of Harford in 1164. Certain prodigies marked him, while an infant in the cradle, as a soul chosen by the Mother of God for Her own. Not yet one year old, he was heard to say the Angelic Salutation distinctly, before he had reached the age to learn it. As soon as he could read he began to recite the Little Office of the Blessed Virgin, and he would never cease to do so daily. He read Holy Scripture on his knees at the age of six. He became the object of the jealous persecution of one of his brothers, and at the age of twelve determined to leave and go to live in a forest.

He found a very large hollow tree which became his oratory; and there Simon Stock lived like an angel of the desert. There he triumphed over the demon, as he would later tell his religious, only by the assistance of the Most Holy Virgin. When, deprived in his retreat of the Sacraments, he suffered sharp remorse and fear of his danger amid demoniac visions of criminal pleasures, Mary showed him the wiles of his enemy’s intentions in these harassments.

After twenty years he returned to his parents and resumed his studies, in particular those of theology. He was ordained a priest to obey the orders of Heaven, then went back to his retreat, which he left definitively in the year 1212. The incentive for his departure was a revelation the Blessed Virgin made to him that the Carmelite Fathers of Palestine would come to found monasteries in England. When two Carmelite monks arrived in the company of two English lords returning from a crusade, he hastened to join them, but troubles prevented the foundation of their projected monastery. The three hermits therefore lived in cells near Oxford. The University of Oxford, by recourse to obedience, prevailed upon Simon’s Superiors to allow him to teach theology there, but he did not remain for long.

During a time of difficulty for England which resulted from the Britannic king’s conflicts with the Pope, he composed the famous hymn, Alma Redemptoris Mater, in honor of the Mother of God, to ask for the king’s conversion; his prayers were heard and suddenly the prince accepted all conditions of peace which a papal legate proposed. Saint Simon was soon made Vicar General of his Order for all of Europe. But opposition to the spread of the ancient Order of the Virgin was raised up by the enemy of souls, until Pope Honorius III put an end to it by bulls approving, confirming and protecting the Order from its enemies. He did so, he said, to conform to a command of the Mother of God Herself.

When a General Chapter of the Order was assembled on Mount Carmel itself, Saint Simon attended it. The question of the flight of the monks from the persecutions of the infidels was debated; Saint Simon won out over another opinion by saying that it was a great evil to expose one’s faith to the dangers of persecution without a specific order from heaven, according to the Gospel: “When you are persecuted in one city, flee to another.” The Order had already lost many of its houses, burnt and desecrated. So the monks dispersed to join an army of Crusaders, not without suffering the loss of the lives of several among them at the hands of the infidels. The Christian army, however, found its waters were poisoned by the hand of its enemies, and retired with Saint Simon and his religious to the Mountain of Carmel once again; there the ancient fountain of Elias gave water in abundance, in answer to their prayers. For six years Saint Simon remained on Carmel before returning to Aylesford in England.

The Order afterwards multiplied its foundations, making several in France, under its pious king Saint Louis IX. So prodigiously did it multiply under Saint Simon, that a few years after his death, towards the end of the 13th century, it numbered, according to William of Tyre, several thousand monasteries or solitudes, which the same author estimated were peopled with some 125,000 religious. Saint Simon visited many of them in his extreme old age; he died at Bordeaux during his journeys in 1265.
Carmelite Carmelite Scapular Carmelites Friar May 16. Presentation of the Virgin Mary Scapular