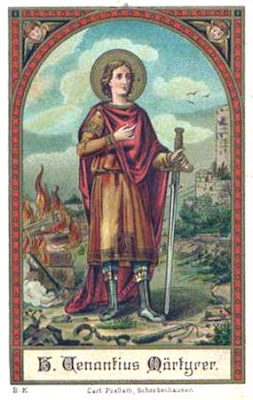 Saint Venantius was according to Christian tradition a 15-year old who was tortured, and martyred by decapitation at Camerino during the persecutions of Decius. Martyred with him were 10 other Christians, including the priest Porphyrius, Venantius' tutor; and Leontius, bishop of Camerino.

Before Venantius was killed, he was scourged, burned with flaming torches, hanged upside-down over a fire, had his teeth knocked out and his jaw broken, thrown to the lions, and tossed over a high cliff. His 11th century Acts state additionally that he managed to briefly escape from Camerino and hide at Raiano, where a church was later dedicated to him.
Beheaded Camerino Child martyr Decius persecution Italy martyr May 18. Saint Venantius