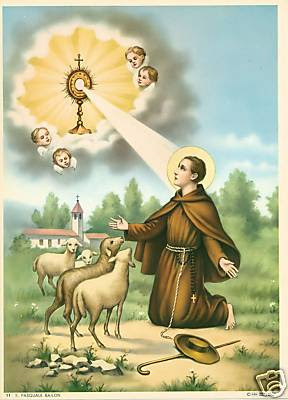 The son of humble peasants, Martin Baylon and Elizabeth Yubero, St. Paschal was born on May 16, 1540 in Torrehermosa, Aragón (Spain). The second of six children. Pascual called him because he was born on the eve of Pentecost.
From 7 to 24 years as a shepherd.
Such was his love for the Eucharist that the owner of the herd said the best gift you could give the child was one day enable him to attend weekday Mass.
From the field where the pastor could see the steeple of the village church. Every now and then knelt to adore the Blessed Sacrament from afar.
One day, while the priest consecrated, other shepherds heard him shout: "There he comes, there it is!". He fell to his knees. He had seen Jesus coming at the time. The Lord appeared to him several times as manly or bright star.
Since childhood was harsh penances, such as walking barefoot through stony roads. When a sheep going to the paddock next door, paid the low wages of the grass that the sheep had eaten.
Sign in with Franciscans.
At 24 he entered the convent of Friars Minor (Franciscans) of Alvatera. At first was not accepted by their low education. Just had learned to read to recite the Little Office of the Blessed Virgin Mary that she always wore while pastoring. His favorite prayer was the Blessed Sacrament and the Blessed Virgin.
The Franciscans assigned humble offices. It was porter, cook, porter and janitor.
His spare time was devoted to Eucharistic adoration, kneeling with arms outstretched. In the evening he spent hours before the Blessed Sacrament. He continued his worship late at night and at dawn was in the chapel before the others.
He spoke little, but when it came to the Holy Eucharist, the Holy Spirit inspired him. He was always cheerful, but never felt so happy as when serving Mass or when they could rest a while praying before the tabernacle of the altar. Arriving at a village went first to church and stayed there for a while kneeling adoring the Blessed Sacrament.
On one occasion, a religious brother looked out the window and saw Pascual dancing before a statue of the Blessed. Virgin and said saying: "Madam, I can not offer great qualities, because I have them, but I offer you my peasant dance in your honor." The priest saw that the saint was overjoyed.
Pascual wrote beautiful prayers to the Blessed Sacrament. The Archbishop of San Luis Rivera, admired cried when reading: "These simple souls who make themselves the best seats in the sky. Our human wisdom is worth little when compared with divine wisdom that God gives to the humble."
He was sent to Paris to deliver a letter to general order. On the way the Eucharist defended against the heresies of a Calvinist preacher, so that almost killed him a Huguenot mob. He was glad to have had the honor to suffer for their faithfulness to the Lord and not complain.
Although Pascual could barely read and write, was able to speak with great eloquence about the presence of Jesus in the Eucharist. He had the gift of infused knowledge. His teachers were amazed at the precision with which responded to the most difficult questions of theology.
I dedicate this verse: From science infused gifted
"You are being lego Doctor
Prophet and preacher;
Theologian accompli ... "
It was noted for his humility and love for the poor and afflicted. He was famous for his miracles and his gift for bringing souls to Christ. Martín Crespo told how the saint had escaped his determination to avenge his father's murderers. Having heard the Good Friday sermon on the passion, urging his friends to forgive. He remained immovable. St. Paschal then took his arm, took him aside and said: "My son, do not you just see the representation of the Passion of Our Lord?". "Then," writes Martin, "with a look that penetrated my soul said," For the love of Jesus Crucified, my son, forgive them. "
"Yes, Father," I replied, lowering my head and crying. "For the love of God I forgive them with all my heart I felt no longer the same person"
When he was dying he heard a bell and asked: "What is it?". "They are on the rise in the Holy Mass". "Oh what a beautiful moment!" And was dead at that moment. It was May 15, 1592, Pentecost Sunday. Villareal, Spain.
During his Mass the coffin were discovered and at the time of the double lift, these were opened and closed his eyes twice. His body even after death, he expressed his love for the Eucharist. So many who wanted to leave of which he had exposed for three days.
He worked many miracles after his death.
Beatified on October 29, 1618 by Pope Paul V
Canonized October 16, 1690 by Pope Alexander VIII
Declared Patron of Eucharistic Congresses and Eucharistic associations by Leo XIII, is also the patron saint of cooks and the municipality of Obando (Philippines). He is an incorruptable.


Prayer
Dear St. Paschal:
Get us the good Lord
an immense love for the Holy Eucharist,
great fervor
in our frequent visits to the Blessed
and a great esteem for the Holy Mass.
AMEN