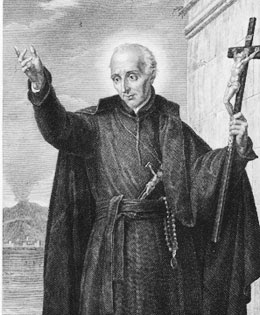 Saint Francis was born in Grottaglie, near Taranto, on December 17, 1642.
This eloquent Jesuit missionary, who was called "the apostle of Naples", distinguished himself by his boundless zeal for the conversion of sinners and his love for the poor, the sick and the oppressed.
In 1666, before the age of 24 years, San Francisco was ordained a priest. During the next five years, he taught at the "Collegio dei Nobili" which the Jesuits had in Naples.
At 28 he entered the Society of Jesus. From 1671-1674, he assisted in the missionary work to the famous preacher Agnello Bruno. After completing his studies in theology, he was named the top man of the Church of the Gesu Nuovo in Naples.
It is said that made at least 400 per year sinners. The Holy visiting prisons, hospitals and did not hesitate to follow the sinners to the dens of vice, where sometimes he was brutally abused.
St. Francis died on May 11, 1716 and was buried in the Church of the Jesuits in Naples.
His canonization took place on May 26, 1839 by Pope Gregory XVI.