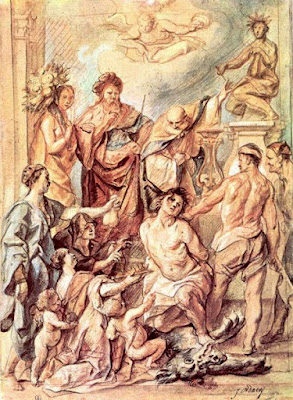 St. Quintin was a Roman, descended of a senatorial family, and is called by his historian the son of Zeno. Full of zeal for the kingdom of Jesus Christ, and burning with a holy desire to make his powerful name and the mysteries of his love and mercy known among the infidels, he left his country, renounced all prospects of preferment, and, attended by St. Lucian of Beauvais, made his way to Gaul. They preached the faith together in that country till they reached Amiens, in Picardy, where they parted. Lucian went to Beauvais, and having sown the seeds of divine faith in the hearts of many, received the crown of martyrdom in that city.

St. Quintin stayed at Amiens, endeavouring by his prayers and labours to make that country a portion of our Lord's inheritance. God made him equally powerful in words and works, and his discourses were authorized and strongly recommended by great numbers of miracles, and illustrated and enforced by a most holy and mortified life. The reward of his charitable labours was the crown of martyrdom, which he received in the beginning of the reign of Maximian Herculeus, who was associated in the empire by Diocletian, in the year 286. Maximian made Rictius Varus prefect of the praetorium, whose hatred of the Christian religion has stored the Martyrology with lists of many illustrious martyrs. Varus seems to have resided at Triers, the metropolis of the Belgic Gaul; but, making a progress into the Second Gaul, when he was near Soissons he had intelligence of the great progress the Christian faith had made at Amiens, and resolved to cut him off who was the author of this great change. When he arrived at Amiens, he ordered St. Quintin to be seized, thrown into prison, and loaded with chains. The next day the holy preacher was brought before the prefect, who assailed his constancy with promises and threats; and, finding him proof against both, ordered him to be whipped unmercifully and then confined to a close dungeon without the liberty of receiving either comfort or assistance from the faithful. The holy martyr, strengthened by Him whose cause he defended, remained superior to all the cruel arts of his barbarous persecutor, and preserved a perfect tranquillity of mind in the midst of such torments as filled the spectators with horror.

When Rictius Varus left Amiens he commanded Quintin to be conducted to the territory of the Veromandui, whither he was directing his course in his return. The capital of that country was called Augusta Veromanduorum. In this city of the Veromandui the prefect made fresh attacks upon the champion of Christ with threats and promises; and being ashamed to see himself vanquished by his courage and virtue, caused his body to be pierced with two iron wires from the neck to the thighs, and iron nails to be struck under his nails, and in his flesh in many places, particularly into his skull; and, lastly, his head to be cut off. This was executed on the 31st of October in 287. The martyr's body was watched by the soldiers till night, and then thrown into the river Somme; but it was recovered by the Christians some days after, and buried on a mountain near the town; fifty-five years after, it was discovered by Eusebia, a devout lady, and a certain blind woman recovered her sight by the sacred relics.1 The knowledge of the place was again lost in the persecution of Julian the Apostate, though a chapel which was built near it remained, when, in the beginning of the year 641, St. Eligius, Bishop of Noyon and the Vermandois, caused the holy relics to be sought; and when they were discovered, together with the great nails with which the body had been pierced, he distributed these nails, the teeth, and hair in other places, and enclosed the rest of the sacred treasure in a rich shrine of his own work, which he placed behind the high altar, as St. Owen relates in his life. A new stately church of St. Quintin was built in the reign of Lewis Debonnaire, and another translation of the relics was made on the 25th of October 825. They were removed to Laon for fear of the Normans, but brought back on the 30th of October 885, and are still kept in the great church, which was in the hands of monks from the time of Ebertran, the first abbot, till these were afterwards dispersed by the inroads of the Normans. In the following age, secular canons were put in possession of this famous church.

Martyrdom, when we are called to it, is an homage we owe to God, and a debt due to faith and religion. How great is the honour and happiness for a poor mortal man and a poor sinner to lay down his mean miserable life for Him who, out of infinite love for us, gave his most precious life! Martyrs are holocausts offered to the divine love and glory. They are witnesses, as the word imports in the original Greek, bearing testimony to the infinite power and goodness of God, in which they place an entire confidence, and to the truth of his holy revealed faith, which they confirm with their blood. No testimony can be more authentic, more glorious to God, more edifying to the faithful, or more convincing to infidels. It is by the constancy of martyrs that our holy religion is established.
Bishop bishop martyr martyr May 24. Quenten St. Quintin