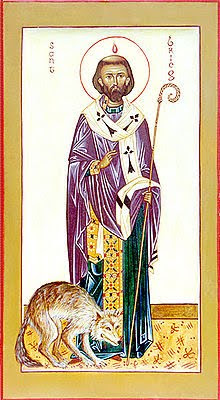 Briocus, Brioc or Bru) A Celtic saint of Brittany who was educated in Ireland and then studied under the guidance of St. Germanus, the famous St. Germanus of Auxerre. Much of what we read about his early years, we have to take it with caution. Ussher says he was born in Ireland, but it is very probable that it was in France for the year 431, also bringing with him to Saint Iltud.
Even before being ordained, Saint Brioc worked many miracles represented in his "Acts" (edited by F. Godefroid Herschenn), and after a brief period, he was with his parents, he entered his career as a missionary. In 480, establesció in Armorica, and founded a monastery in Landebaeron.
From there he went to the High Britain where he established a chapel in a place known as Saint Brieuc-des-Vaux, between Saint Malo and Land Trigui; of that place he was appointed as its first bishop. Many miracles are mentioned in his "Acts," especially the treatment of Riguel Conde, whom the nobleman gave his own palace Champ-du-Rouvre and other minor properties.
Scholars differ as to the date of death of Saint Brioc, but most likely occurred in the 502, or very early in the sixth century. He died in his own monastery of St. Brieuc-des-Vaux and was interred in the cathedral of that place, dedicated to San Esteban. Baring-Gould suggests that Saint Brioc is represented as "threatening a dragon" or "a pillar of fire", as seen in their management.
His relics were transferred to the Iglesdia of Saints Sergius and Bacchus of Angers in 865, and then again more solemn manea July 31, 1166. However, in 1210, a portion of his relics were returned to the Cathedral of Saint Brioc, where it also preserves the holy ring. The feast of Saint Brioc is celebrated on 1 May, but since 1804, was transferred to the second Sunday of Easter. There are churches in England, Ireland and Scotland are dedicated to this ancient Celtic saint.