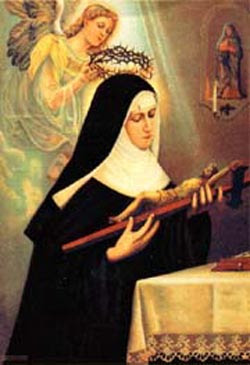 Known as the "Saint of the Impossible". Rita Lotti was born in 1381 in the tiny hamlet of Roccaporena, near Cascia, in the Province of Umbria, Italy. Her parents Antonio and Amata looked upon their only child as a very special gift from God since she was born to them as they were already getting on in years.
The Lottis were a devout Christian couple, offering their daughter the witness of strong faith in God and a practical example of Gospel living, especially in their role as official peacemakers or reconcilers among their fellow citizens. It should not have been surprising then that Rita, who shared her parents strong faith and religious devotion, would have desired to dedicate her life to God as a nun. Unexpected, rather, was the response of Antonio and Amata, who preferred to see Rita married, and who, in fact, had arranged a suitable husband for her.

Though initially disappointed, Rita understood this choice to be the expression of God’s will for her and so she consented. Both the civil and ecclesiastical climates at the time were not healthy ones - frequent conflicts and family rivalries were routinely settled by the rule of vendetta on the social level - and the scandal of antipopes and their rival bishops dominated the life of the Church. The only child of aging parents would have been far safer under the protection of a good husband, they thought, than she would be behind the unguarded walls of a convent.

Thus Rita was married to Paolo Mancini, a good man though of strong and impetuous character. Their marriage was blessed with two sons, perhaps twins, and Rita’s days were soon filled with the typical concerns of wife, mother and housekeeper, while Paolo was employed as a watchman for the town. As a minor civil servant, Paolo often found himself drawn into the conflicts that existed between rival political factions, and this may account for the tragedy which eventually touched the Mancini family. One day as he was returning from work Paolo was ambushed and killed. The pain which this unexpected and violent death inflicted upon Rita was only compounded by the fear that her sons would seek to avenge their father’s death.

Her example of forgiveness, her words of instruction and pleading, her prayers for their change of heart, were unable to move the two boys to forego any act of retaliation, and so Rita entrusted the cause totally to God, asking him to handle the situation which was beyond her control. As it happened, both sons died within the year.

Now alone, Rita gave herself to works of charity and to a more intense life of prayer. Eventually the desire to enter the convent once more grew in her, but her request for entrance among the Augustinian Nuns of Cascia was refused, not once but three times. Though Rita was known to the nuns of the Monastery of Saint Mary Magdalene, her good character and religious spirit were outweighed, in the judgment of the community, by the violence that surrounded Paolo’s death. The nuns were afraid of tempting the peace of convent life, possibly because one of their members belonged to the family responsible for Paolo’s murder. But Rita felt deeply that this was the vocation to which she was called and she turned to her three patron saints to intercede for her. After the third refusal of the nuns, Rita recognized that she herself must put their fears to rest. She approached Paolo’s family as well as their rivals, and persuaded them to put an end to their hostility and to live in peace.

The example of her own forgiving spirit, no doubt, was an inspiration and - perhaps an embarrassment - to them. The families were reconciled. They signed a document to this effect, and when Rita presented the document to the nuns, they no longer had reason to refuse her. Rita Lotti Mancini now became Sister Rita.

For the next forty years Rita lived the life of an Augustinian Nun, according to the Rule of the saint she had chosen years before as her spiritual father, Saint Augustine of Hippo. His was a gentle Rule which invited the members of the community to strive in every way possible to achieve communion of mind and heart with God and one another. Her days were spent in prayer and contemplation, in service to the sick and the poor, and in activities necessary to support the life of the small community.

After twenty-five years of religious life, Rita was given what she considered a most treasured and singular gift from God. Always devoted to Jesus crucified, her desire constantly grew to share in his great act of love for her and for all humanity by helping to carry his cross. One day as she knelt in prayer, her forehead was pierced by a violent wound, a thorn from the crown that covered Jesus’s own head. She bore this wound for fifteen years until the day of her death.

For the last several years of her life Rita was confined to bed. The last of the many crosses she was presented in life was now the humbling condition of an invalid, totally dependent upon the charity of her sisters. Finally, on May 22,1457 Rita’s life on earth came to an end. The various crosses she had born as wife, widow, mother and nun were now put aside once and for all as she met the embrace of her Risen Lord.
Agustinian Nun incorruptable incorruptables May 22. Nun Rita of Cascia St. Rita of Cascia stigmata stigmatic Widow Widowed wounds of christ