Ss. Philip and James the Less 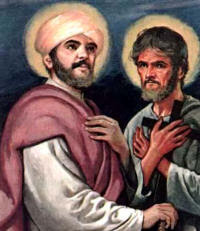 St. Philip was from Bethsaida in Galilee. St. John speaks of him several times in the Gospel. Recounts that the Lord Jesus called Philip the day after the vocations of St. Peter and St. Andrew. In the Gospels it is clear that the Holy answered the call of the Lord. Writers of the early Church and Eusebius, historian of the Church, affirm that St. Philip preached the Gospel in Phrygia and died in Hierapolis. Papias, bishop of this place, known by the daughters of the apostle, which was attributed to Philip the miracle of the resurrection of the dead.
A James is called "the Younger" to distinguish it from other apostle James the Major (who was martyred shortly after the death of Christ).
The gospel says that he was from Cana in Galilee, that his father's name was Alpheus and family of our Lord. It is called "the brother of Jesus", not because he was the son of the Virgin Mary, who had but one Son, our Lord Jesus Christ, but because the Bible is called "brothers" that come from the same grandfather : cousins, uncles and nephews (and probably James was "cousin" of Jesus, the son of a sister of the Blessed. Virgen). In S. Bible we read that Abraham called "brother" a Lot, but Lot was the nephew of Abraham. And you see also that Jacob called "brother" Laban, but Laban was Jacob's uncle. So to say that any were "big brother" of Jesus does not mean that Mary had other children, but these so-called "brothers" were simply relatives: cousins, etc.
St. Paul says that one of the apparitions of the Risen Jesus went to James. And the book of Acts tells how the Jerusalem Church was highly esteemed this apostle. (They called him "Bishop of Jerusalem"). St. Paul has him, the first time went up to Jerusalem after his conversion, went to visit San Pedro and did not see any of the other apostles, but only to Santiago. When Peter was released by an angel from prison, he ran to the house where the disciples were staying and left them the task of "communicating to Santiago and the other", who had been released and was going to another city (Acts 12:17). And the Holy Book tells us that the last time that St. Paul went to Jerusalem, before everything went "to visit James, and there at his house met all the heads of the Church of Jerusalem" (Acts 21.15 .) St. Paul in his letter to the Galatians states: "Santiago is, along with John and Peter, one of the pillars of the Church." (For all this it follows that it was much revered among Christians).
When the apostles met in Jerusalem for the first Council or meeting of all heads of the Church, was the apostle James who wrote the letter addressed to all Christians (Acts 15).
Hegesippus, historian of the second century says: "James was called 'The Saint'. The people were sure he had never committed a grave sin. He never ate meat or drank liquor. Spent so much time kneeling in prayer in the temple, which at last did you calluses on their knees. prayed many hours worshiping God and asking the Lord to forgive the sins of the people. People called him: 'He who intercedes for the people'. " Many Jews believed in Jesus, moved by the words and the good example of Santiago. Therefore, the High Priest Annas II and the heads of the Jews, a day of great celebration and great crowd said, "We pray that as the people feel great admiration for you, you appear before the crowd and tell them that Jesus is not the Messiah or Redeemer. " And James appeared before the crowd and said: "Jesus is the messenger of God for salvation to those who want to save. And we'll see one day on the clouds, sitting at the right hand of God." Upon hearing this, the chief priests were enraged and said: "If this man is speaking, all Jews are going to make followers of Jesus." They took it to the top of the temple and from there threw him down the precipice. James did not die suddenly but prayed on his knees saying, "Father God, please forgive me that they know not what they do."
The Jewish historian Josephus says that he came to Jerusalem great punishment from God, for the murder of James who was considered the holiest man of his time.
The apostle wrote one of the most pleasant and helpful writings of S. Bible. The so-called "Letter of James." It is a beautiful and highly practical message. Hopefully none of us stop reading it. At the end of the Bible. He said how are you so important phrases: "If someone pretends to be religious person and do not speak their language, their religion is wrong and futile." "Oh rich: If you do not share their wealth with the poor, get ready to great punishment from heaven." "If anyone is sad to read. If anyone gets sick, they call for the elders and anoint him with holy oil, and that prayer will draw much the patient" (hence the Church took the habit of doing the anointing of the sick .) The most famous sentence of the Letter of James is this: "Faith without works is dead."