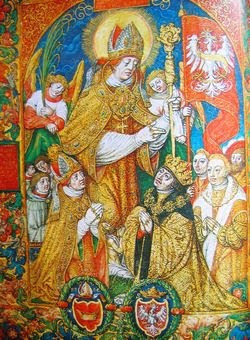 The story reminds the King Boleslaw II of Poland (1058-1079) for his military victories that solidified its young state and expanded, the development of land which he promoted a new regional organization, and legal and economic reforms. But the first Polish historian, Vicente Kadlubeck, this king also recalls the grave injustices and private conduct immoral.
But on his way Boleslav found a severe censor. Like John the Baptist for Herod, the brave bishop of Krakow, Stanislaw, raised his voice, warning the sovereign power over the duty to respect the rights of others.
Stanislaus was born in Szczepanowski (Poland) by the year 1030, of parents rather poor. He made his first studies with the Benedictines of Krakow, and then perfected in Belgium and Paris. When he returned to his country, was distinguished for his zeal and by the charitable initiatives carried out with charity and intelligence. Dead Bishop of Krakow, Pope Alexander III appointed him his successor. His appointment was promoted not only by the people and clergy, but also by the same Boleslav II, who in the early years contributed to the work of evangelization of the whole region and the training of clergy
Stanislaus of Kraków, Saint
local, secular, which should gradually take the place of the Benedictine monks in the administration of the Polish Church.
The good rapport between the bishop and the sovereign lasted until the brave Estanislao had to put their duties as pastor to the tolerance for the faults of a friend, as the reprehensible conduct of the sovereign could encourage bad habits of the subjects.
Indeed, the chronicles of the time tell the king fell in love with the beautiful Christine, the wife of Mieszko and, without thinking twice, made her kidnapping with serious scandal to the whole country. Estanislao threatened him with excommunication and then excommunicated him, then the King Boleslav became enraged and ordered the murder of Stanislaus in Krakow, in the church of Saint Matilda, during the celebration of mass. It seems that the horrible "murder in the cathedral" was committed by the same sovereign, after the guards were forced to retreat by a mysterious force. It was the April 11, 1079.
From the day of his martyrdom, the Poles began to worship him.
St. Stanislaus was canonized on August 17, 1253 in the Basilica of St. Francis of Assisi, and since then her cult spread throughout Europe and America. St. Stanislaus of Szczepanów is a National Symbol to Poland.

Prayer
Father may the life and death
of your martyr St. Stanislaus of Szczepanów
help us understand that we must
all ways protect the holy Catholic
Church nad your name.
AMEN