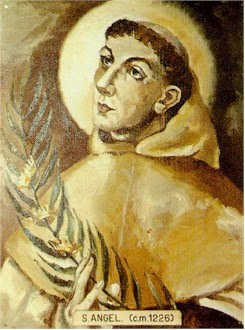 Born in Jerusalem, within a family of Jewish converts.
In the early death of his twin brother, St. Angelus decided to enter the Carmelite Order, and is admitted to the monastery on Mount Caramel in Palestine.
In the thirteenth century, the Carmelites went from being a contemplative order to become a mendicant order, remember that it was the century of the spiritual revolution of St. Francis of Assisi and Saint Dominic de Guzman.
San Angel is eventually sent to Rome to deliver a message to Pope Honorius III. Then get the commission to go to Sicily to help preach against the heresy of the Cathars, who had taken control of the island.
However, shortly after his landing in Sicily, St. Angelus was killed by treachery with five stab wounds in the back, ordered by the leader of heretics. At the site where a church was built died, and his tomb soon became a pilgrimage site.
The Carmelite Order St. Angelus venerated as a saint at least since 1456. In 1459 Pope Pius II approved his cult.
St. Angelus is among the first Carmelites who came from Mount Caramel to Sicily, where, according to traditional sources credible, died Licata stabbed to death at the hands of wicked men, in the first half of the thirteenth century.
Revered as a martyr, he soon built a church on the place of his martyrdom, and his body was placed there.
Only in 1662 his remains were moved to the church of the Carmelites of Licata.
The cult of St. Angelus spread throughout the Order and also among the people. He and St. Albert of Trapani are considered the "fathers" of the decree as the first two saints who worship in the order received, and thus were often represented in medieval iconography next to the Virgin Mary.
In Sicily there are many places that have a patron St. Angelus , and the people relies on the needs, addressing him with affection and love.
St. Angelus provides an example of mysticism and obedience.

Prayer
Father may the life of
your martyr Angelus help
us grow in the faith so
we all can love the
holy Catholic Church.
AMEN