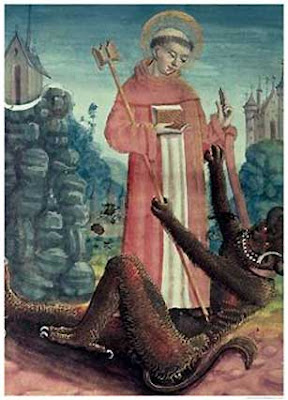 Born in 923, probably in the Château de Menthon near Annecy, in Savoy; died at Novara, 1008. He was descended from a rich, noble family and received a thorough education. He refused an honorable marriage proposed by his father and decided to devote himself to the service of the Church. Sneaking away from the chateau the day before the wedding, he fled to Italy and joined the Benedictine order. Placing himself under the direction of Peter, Archdeacon of Aosta, under whose guidance he rapidly progressed, Bernard was ordained priest and on account of his learning and virtue was made Archdeacon of Aosta in 966, having charge of the government of the diocese under the bishop. Seeing the old pagan ways still prevailing among the people of the Alps, he resolved to devote himself to their conversion. For forty-two years he continued to preach the Gospel to these people and even into many cantons of Lombardy, effecting numerous conversions and working many miracles. In popular legend it is said that during his flight from Château de Menthon, Bernard cast himself from his window only to be captured by angels and lowered gently to the ground forty feet below. He is the patron saint of skiing, snowboarding, hiking, backpacking and mountaineering
Dominion over devil helping others May 28. Path of St. Bernard St. Bernard of Menthon