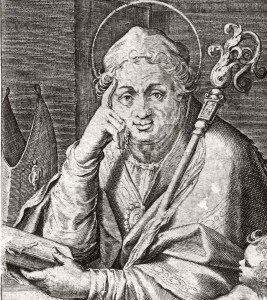 Ethelbert, He married Berta Christian princess, daughter of the king of Paris, he asked her to be erected a church and some Christian priests hold sacred rites there. When Pope Gregory the Great heard the news, concluded that the time was ripe for the evangelization of the island. Entrusted with the mission to the prior of the Benedictine monastery of Saint Andrew, whose main characteristic was not courage, but humility and docility. That monk was Augustine. In 597 out of Rome leading a group of forty monks. He stopped at the island of Lerins. Here is discussed the bellicose temperament of the Saxons, and it terrified him to the point of him back to Rome to ask the pope to change his program. To encourage him, Gregory was appointed abbot and soon after, almost to make him take the final step, as soon came to Gaul, he consecrated bishop. He continued his journey with short steps. Finally he came to the British island of Thenet, where the king was personally welcome the invitation of his pious wife. The missionaries moved into the royal procession in procession and singing the litany, as recently introduced the rite in Rome. For all it was a happy surprise. The king accompanied the monks to the residence that had been prepared in Canterbury, halfway between London and the sea, where stood the famous abbey which later carried the name of Augustine, heart and sanctuary of English Christianity. The work of missionary monks had an unexpected success because the king asked for baptism, leading by example to thousands of subjects to embrace Christianity. The Pope was delighted with the news that reached Rome, and expressed satisfaction with the letters written to Augustine and the queen. The holy pontiff sent a group of new partners the pallium and the appointment of Augustine as archbishop primate of England, while the paternally admonished not to pride in the successes and the honor of high office conferred upon him . Following the instructions of the Pope to the distribution in ecclesiastical territories, Augustine erected other episcopal sees, the London and Rochester, consecrating bishops to Melito and Justo.