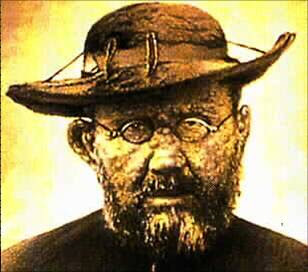 The Leper Priest, the Hero of Molokai. Born in Tremelo, Belgium, on January 3, 1840, he joined the Sacred Hearts Fathers in 1860. He was bom Joseph and received the name Damien in religious life. In 1864, he was sent to Honolulu, Hawaii, where he Was ordained. For the next nine years he worked in missions on the big island, Hawaii. In 1873, he went to the leper colony on Molokai, after volunteering for the assignment. Damien cared for lepers of all ages, but was particularly concerned about the children segregated in the colony. He announced he was a leper in 1885 and continued to build hospitals, clinics, and churches, and some six hundred coffins. He died on April 15 , on Molokai. Slandered by a Protestant minister, Mr. Hyde, Damien was defended by Robert Louis Stevenson, who wrote an impassioned defense of Damien in 1905. He was declared venerable in 1977. Pope John Paul II declared him beatified on June 4, 1995.
American Saints Barack Obama Belgium Congregation of Sacred Hearts of Jesus and Mary Fr. Damien of Molokai Hawaii Leper May 10 October 11. Pope Benedict XVI Saint Damien of Molokai