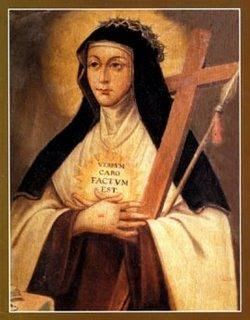 The Pazzi family, whose name is linked to the conspiracy against the Medici Grand Duke, in times of our holy, it was still the most important in Florence. Catherine de 'Pazzi (Mary Magdalene is the name of the holy Carmelite who took the day of her religious profession) was born in 1566 in a century rich in events in the civil and religious history in Italy and characterized by exceptional flowering of great saints.

Maria Magdalena de Pazzi also participated in the historical and social situation of his time writing letters very brave to the Pope, cardinals, bishops and princes, noting the causes of the evils afflicting the Church, which she attributed to spiritual shortcomings of Christians and their pastors.
This is a wonderful side of the saint associated with the passion of Christ with the stigmata and other mystical phenomena as visions, ecstasy, rapture, during which was difficult theological issues.

Three sisters, responsible for the spiritual director, transcribed the revelations of Sister Mary Magdalene. The book, entitled Contemplations and written that way so exceptional is considered an important treatise of mystical theology, and also reveals the spiritual journey of the saint, who at 18 had entered the more austere Florentine convent, that of Carmelites.
From a very young girl, Catherine de 'Pazzi was more inclined to devotion to the comfortable life of his time. Indeed, had the privilege, at that time very rare, making her First Communion at the age of ten years.

After giving the farewell to the world and have changed the name, Sister Mary Magdalene was a docile instrument of divine grace, through all stages of mystical experience, from the boldness of contemplation to the torturous test of the night of the senses, in the dark abyss of spiritual aridity, which lasted for five years, during which it was tested in faith, hope and charity. And finally, at Pentecost in 1590, his spirit was again submerged by the bright light of ecstasy, strengthened for the new test successively, the physical pain.

Martyred in the painful body sores, when the pain became unbearable, Sister Mary Magdalene, who had been appointed master of novices, he found the strength to repeat the words that became the motto of his life: "Pati, non mori" , to suffer and die. He died on May 25, 1607, in the convent of Santa Maria degli Angeli in Florence.

She is an incorruptable. 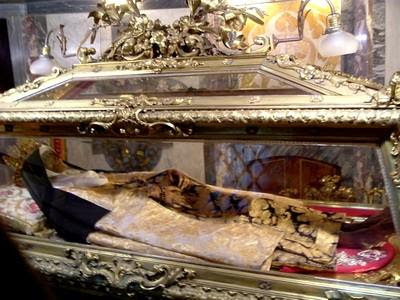