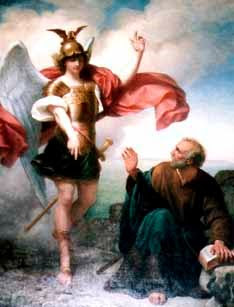 Saint Aubert was bishop of Avranches in the 8th century and is credited with founding Mont Saint Michel.

He lived in France during the reign of Childebert III (695-711) and died in 720. According to legend, in 708 he had a vision in which the Archangel Michael instructed him to build an oratory on the rocky tidal island at the mouth of the Couesnon. Aubert did not pay attention to this vision at first, until in exasperation Michael appeared to him again, this time driving his finger into Aubert's skull and ordering him to complete the task again. Michael is said to have appeared to him a total of three times. After this the oratory was built. It was dedicated in October 16, 709, and Aubert is reputed to have been buried in it.

The relic of Aubert's skull, complete with hole where the archangel's finger pierced it, can still be seen at the Saint-Gervais Basilica in Avranches. It is more generally believed nowadays that the skull is in fact a prehistoric relic showing evidence of trepanation.