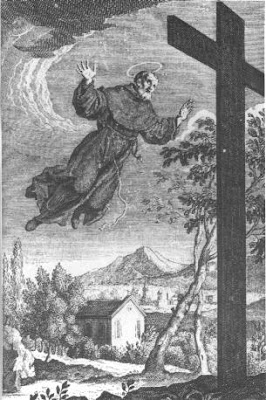 Joseph was born in 1603 in the small Italian town called Cupertino. His parents were extremely poor. The child came into the world in a poor shed attached to the house because the father, a humble carpenter , was unable to pay the fees to be their home and had been arrested .-

At 17, he asked to be admitted to Franciscan but was not admitted . He asked to be received in the Capuchins and was accepted as a lay brother , but after eight months he was expelled because he was extremely distracted. Dropped when carrying dishes to the dining room. You forgot the trades that had been placed . It seemed I was always thinking of other things. As useless as they sent out .-

To be discarded, Joseph sought shelter with a family member who was rich, but he said that this young man " was not good for nothing " , and threw him into the street. He was then forced to return to misery and contempt of his house. Mom felt not the slightest pleasure at returning to such " useless " , and to get rid of him insistently asked a relative who was a Franciscan, to welcome him to the boy as a porter at the convent of the Franciscan Fathers .-

Then succeeded Joseph worked in changing anybody imagined . The parents received as a worker and put him to work in the barn and began performing with remarkable dexterity in all the offices entrusted to him . Soon with his humility and his kindness , his spirit of penance and love of prayer, gained the esteem and appreciation of the religious, and in 1625 , by unanimous vote of all the friars of this community, was admitted Franciscan .-

He began to study to be presented to the priesthood, but it happened that when I went to take exams is to lock everything and was not able to respond. Reached a final exam and the poor Fray José gospel the only sentence he could fully explain it was that which says : " Blessed is the fruit of thy womb, Jesus. " I was frightened but starting the test , the head of the examiners said , "I will open the Gospel and the first sentence that comes out, will be the one to explain. " And he went out precisely the phrase that the Cupertino only known perfectly: "Blessed be the fruit of thy womb " .-

At last came the final examination in which it decided who would be ordained. And the first ten considered the bishop responded so wonderfully well all the questions, the bishop suspended the examination , saying, What further consideration to others if everyone is so formidably prepared? "and there was making it turn to consider, the Joseph of Cupertino, trembling with fear in case he were to disqualify . And such a catastrophe was spared by chance .-

Ordained in 1628, was devoted to trying to win souls through prayer and penance . He knew he had no special qualities to preach or to teach, but then made up for these shortcomings by offering great penances and many prayers for sinners. Never eat meat or drink any kind of liquor. He fasted on bread and water for many days. He devoted himself with great effort and dedication to the craft of the convent (which was the only thing he was trained) .-

From the day of his ordination his life was an uninterrupted series of ecstasy, miraculous healings and supernatural events to a degree not known in similar amount to any other saint. Enough to hear about God or heaven to become insensitive to what was happening around him. Now he explained that he was so distracted child and with his mouth open. One Sunday , the feast of the Good Shepherd , he found a lamb, is it on his shoulder and think of Jesus the Good Shepherd, went higher and higher into the air with lamb and everything .-

The animals felt a special affection for him . Passing through the countryside , he began to pray and the sheep were gathered around and listened very carefully to their prayers. The swallows fly in large flocks around his head and accompanied him for blocks and blocks .-

We know that the Catholic Church calls a state of ecstasy to lift the soul into the supernatural , during which the person temporarily escapes the influence of the senses, to see what pertains to divinity. San Jose, Cupertino was frequently in ecstasy during Mass, while praying the psalms of the S. Bible. During the 17 years he was in the convent of his fellow community Grotella 70 witnessed this holy ecstasy . The most famous was when 10 workers wanted to carry a heavy cross to a hill and failed . Then Brother Joseph flew through the air with a cross and everything and carried it to the top of Mount .-

Pope Benedict XIV was very rigorous in not accepting a miracle anything that was not really a miracle, carefully studied the life of Joseph of Cupertino and declared: "All these facts can not be explained without a special intervention of God " .-

The last years of his life, Joseph was sent by his superiors to convents far away where no one could talk to him. People found out where it was and ran toward it. Then he was sent to another convent farthest yet. He suffered months of spiritual aridity and dryness ( as Jesus in Gethsemane ) but then on the basis of much prayer and constant meditation , he returned again to the peace of his soul. To those who consulted him spiritual problems always gave a remedy: " Pray , pray never be weary . God is not deaf nor the sky is brass . Everyone who asks receives " .-

He died on September 18, 1663 at the age of 60 years .
May God teach us with these events so wonderful that he always praises
Joseph of Cupertino , Saint
those who are humble and full of grace and blessings .-