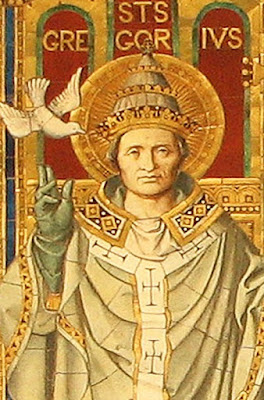 Pope St. Gregory the Great was an apostle of the English, one of the most important popes and influential writers of the Middle Ages. Gregory was the son of a Roman senator and entered the service of the State as a young man. But in 573 he sold his enormous properties, founding six monasteries in Sicily and a seventh in Rome, and giving generously to the poor. The next year he entered his own monastery of St. Andrew's on the Celian Hill as a monk and was distinguished for his austere life, which both filled him with nostalgia in later years and caused some of the ill-health which he suffered so constantly. Pope Benedict I, however, called him out of the monastery to become one of the seven deacons of Rome, and his successor, Pelagius II, made him apocrisiarius (ambassador) in Byzantium. After six years of distinguished service Gregory returned to Rome to become abbot of St. Andrew's, seemingly convinced that the future of Christianity lay with monasticism rather than with the declining Eastern Empire. But his own choice of monastic life was destined to be frustrated. He had hoped to lead some missionaries to bring the Gospel to the Anglo-Saxons—he had been specially impressed by some Anglo-Saxon slaves on sale in the Roman market—but he was elected pope during an outbreak of plague. Reluctantly he accepted and was confirmed by the emperor.

He was at once faced with a state of crisis. Floods, famine, plague, a Lombard invasion, all called for urgent attention, while in the longer term there were the dominance of Byzantium in Church affairs and the need of barbarian peoples to be converted to Christianity. His care for other Western churches was matched by few popes before his time and contributed to the emergence of the medieval papacy.

In 592–3 he concluded a separate peace with the Lombards, virtually ignoring the exarch of Ravenna, who was the emperor's representative in Italy. He also appointed governors to Italian towns, administered the vast estates of the Church with prudence and skill, and in the breakdown of imperial authority assumed many of the roles of a civil ruler.

One of the most notable initiatives of his pontificate was the conversion of the Anglo-Saxons. In the whole process Gregory personally took the lead; he had corresponded in advance about it, he had arranged for the liberation of some Anglo-Saxon slaves, and he sent Augustine and his monks on this hazardous but imaginative undertaking. After their initial success Gregory still directed by giving guidance in matters that perplexed Augustine, by sending reinforcements in 601, and by writing to the king and queen of Kent. This policy was continued by Gregory's successors: as a consequence the Church in England was in many ways closer to the papacy than that in Gaul. In England was written the first Life of Gregory: from Bede at Wearmouth, Aldhelm at Malmesbury, and the anonymous biographer from Whitby come eulogies of Gregory as the ‘apostle of the English’, ‘our father and apostle in Christ’, ‘he from whom we have received the Christian faith, he who will present the English people to the Lord on the Day of Judgment as their teacher and apostle’. Later devotion to Augustine and Aidan have obscured this earliest realization of Gregory's personal importance as apostle of the English. By choosing the personnel of the mission and by his direction, encouragement, and support he was both pioneer and continuator in the work. After his death his influence continued by his writings.

These were remarkable for quantity, quality, and their suitability for the readers of his own and future generations. His principal achievement was to pass on to converted barbarians the wisdom of the Fathers of the Graeco-Roman world, such as Origen, Augustine of Hippo, and Ambrose of Milan. This was particularly true of his Homilies on the Gospels and the Moralia on the book of Job, written in Constantinople at the request of Leander. His more original works such as the Pastoral Care (later translated into OE. by King Alfred) and the Dialogues (or Lives of the saints) also enjoyed great popularity: one formed the episcopate of the Middle Ages more deeply than any other book, while the other both reflected and encouraged the preoccupation of contemporaries for the miraculous, before the role of secondary causes in the Christian worldview was properly understood. Both books were standard works in most monastic libraries; their popularity did not cease at the Norman Conquest. Gregory's 854 Letters are perhaps his most interesting work for historians of today. They reveal his wisdom, prudence, and preoccupation with the problems of both Church and State, including monasticism, the missionary role of the Church, the legitimacy of icons, the integrity of catholic doctrine, and the reproof of prelates who gave themselves grandiloquent titles. He preferred to be known as the ‘servant of the servants of God’, a title retained by his successors to the present day. 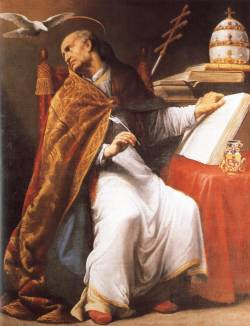 His role in the development of the Roman Liturgy was considerable, but disputed. He certainly modified various minor features and composed a number of prayers which formed the kernel of the Gregorian Sacramentary, even if this reached its final form after his death. Many prayers in it also were inspired by his thought and terminology if not actually written by him. His name has always been associated with Church music and especially Gregorian Chant: he probably took a prominent part in the gradual codification and adaptation of at least four pre-existing forms of plainsong. Although he wrote the earliest Life of Benedict of Nursia in book II of his Dialogues and showed great appreciation of his Rule, it seems that his own monastery was not formally ‘Benedictine’ but rather basilican in character. Nevertheless, his writings reveal much influence of the Rule, and the traditional image of him as a Benedictine, even if juridically incorrect, still stands as a description of his spirit and outlook. It would be hard to name anyone more influential in forming the spirit of medieval monasticism. Indeed, in the wider sphere of the life of the Church as a whole, Gregory's reign of only thirteen years is rightly seen as decisive in the development of the medieval papacy; he thoroughly deserved the title of ‘the Great’.

During much of his life he suffered from both gout and gastritis, but these afflictions seldom affected his judgement. Even when reduced in health just before his death, he dictated letters and cared for the needs of the churches. He must have been sixty-five or seventy when he died. He was soon acclaimed a saint.

In England thirty-two ancient and many modern churches are dedicated to him and his principal feast was given a high rank from early times and celebrated universally. The earliest pictures of Gregory show him as pope, writing, with the Holy Spirit in the form of a dove dictating what he should write: these survive especially in liturgical books of the early Middle Ages. Later he figures (as on Norfolk screens and pulpits) as one of the Four Latin Doctors (with SS. Ambrose, Jerome, and Augustine). Later again the pictures stress his role as teacher of the efficacy of prayer and the sacrifice of the Mass in freeing souls from the pains of Purgatory, either the emperor Trajan, delivered by the prayers of Gregory himself, or the monk unfaithful to poverty who was freed by thirty masses said on successive days (still called a gregorian trental). Luigi Capponi especially developed these themes in the 15th-century sculptures in the church of St. Gregory at Rome. In the 15th and 16th centuries (but not afterwards) the ‘Mass of St. Gregory’ paintings were popular, especially but not exclusively in Germany and Flanders. These depict him saying Mass while the suffering Christ appears above to confirm the faith of the ministers in the Real Presence. This is not based on any incident in Gregory's life, nor does it appear in the account in the Golden Legend. Gregory was also highly esteemed in the East and in ancient Ireland, where he was even provided with an Irish royal genealogy and an apocryphal Liber de Gradibus Coeli attributed to him.
Doctor of the Church Musicians mystic. Pope Pope St. Gregory the Great September 3 St. Gregory the Great Theologian