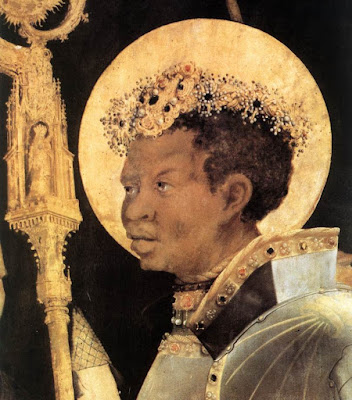 Saint Maurice (also known as Maurice , Moritz or Mauritius) . He was the commander of the Theban Legion martyred and died in the early third century.

The Theban Legion , consisting only of Christians from Egypt , was ordered to leave for Gaul to aid the Emperor Maximian. Although they fought bravely , refused to obey the imperial order to persecute Christians , so they were decimated. Refusing a second time, all members of the Theban Legion were executed. The place where these events allegedly took place , known as Agaunum , is now the headquarters of the Abbey of Saint Maurice in the Swiss canton of Valais.

This is the earliest version of the story of the martyrdom of the Theban Legion , according to the letter Eucherius , archbishop of Lyon (c. 434-450 ) went to the bishop also Salvius . In other versions varies the cause of martyrdom, and the legionnaires were executed for refusing to make sacrifices to Roman gods.