Our Lady of Mercy 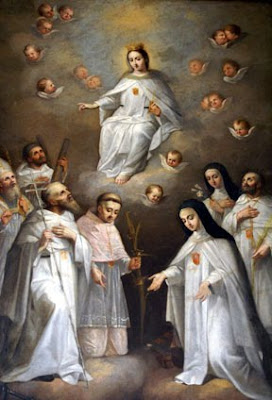 She has fallen into my hands a little story of Mercy , and I look forward to dedicate this message today to Our Lady of Mercy, a name and a beautiful invocation of Mary, who appeared to St. Peter Nolasco, the Court held St. Raymond Nonnatus and liberaated many captives. They called the Merced for using the highest charity with their children most in need.

We have to move to Europe at the beginning of the twelfth century . The Mediterranean was infested by pirates and Saracens, Turks , Muslim fanatics who attacked the boat , down the coast , leveling homes and entire villages , robbed , murdered , and , worst of all, Christians were carried to North Africa to be sold as slaves and make them forsake the faith. Given the impotence of the Christian nations , will be the Virgin Mary - the same as always , which is the Help of Christians - who is involved with a hand gently but firmly , and with Mother's heart .

A wealthy merchant of Barcelona asked anxious relatives and friends
- But what are you doing , what with selling all your business and teach this group of guys to do the same ? Why are you getting into these boats Moors with so much danger ?
And Peter Nolasco , without any fear , responds to all:
- Nothing. Do you want to come along to rescue from the Moors to Christians who are slaves? I need more volunteers.

Now the Virgin is involved . It was the night of 1 August 2, 1218 . Peter Nolasco was in prayer, when the first sparks of heavenly light . They begin to see angels and more angels, who are surrounding a beautiful Lady , which loving smiles , and says :
- What are you doing pleasing to God. Do not get discouraged . I will now request that founded a religious order . Your peers , imitating my Son Jesus , will go to the salvation of their brothers , if necessary giving a pledge to ransom. I am with you .
Peter Nolasco did not doubt the presence of Mary, and communicates the vision of Don Jaime King and royal advisor San Raimundo de Peñafort , which speak with the bishop, who is amazed :
- But is it true what they say ? If so , I put on my habit to those brave .
With the protection of Mary and the mission of Bishop. Peter Nolasco and his companions embark on a company can not be beaten .

Soon they were added Raymond Nonnatus, brave as any. He was ordained a priest, and march to the north of Africa to rescue captives. It gives all, is left without a penny, and asks:
- What do I do now ?
Love is ingenious, and gives him a heroic resolution . Unable to rescue more slaves, because they do not have a penny , it has decided to one owner:
- Here I am. I sell myself into slavery. How much is it for me?
The rich will not loose money, and offers with disdain :
- The freedom of another slave.
- Accepted ! ...
And, Raymond become a slave , is given with ardor to preach to the other captives the Christian faith. But its new owners , not to talk more, we close the mouth with a padlock. lasts eight months in captivity and martyrdom.

When you get the money for his ransom , is released and returned to Spain. In Barcelona, makes it a triumphal reception . And Pope Gregory IX called to do Cardenal, but died just beginning the road to Rome.

Nice story, which tells us much today. While there are men , our brothers, the slaves of other men, who are oppressing unfairly , always the Virgen de la Merced will have a word for them.

While there are men , our brothers, who have made themselves captives of a defect either , the Virgin will be for them a maternal heartbeat .

While only one person who suffers, the Virgin will have to play his trade of releasing the pain.

They are captives - fairly or unfairly, for us is the same - many prisoners who , in the prisons of our country , they have decent living conditions of a human person .

They are captives of the society so many ragged children who swarm in our streets , pickpockets at such a young age, no home, no school, no hope of a dignified position among the citizenry.
They are captive so many women , not just freedom from slavery to the thousands who have been subject for centuries, and they expect deliverance.

They are captive so many people at home , when he needed love, and fail the husband or wife and mother fails , turning the house into a prison or a little less .

We are prisoners of ourselves when we do not fully break ties - strong as wire ropes or fine as silk - that prevent us from flying free to God.

Our Lady of Mercy , you see one you already have something to do in the world! There are still many slaves who groan in chains and locked in prisons of darkness. If your children want to release prisoners, serving you from us, here we are , tools in your hands faithful Mother.