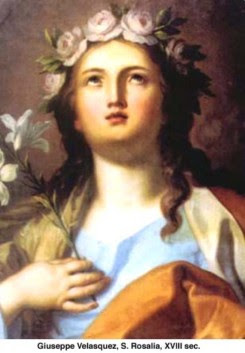 She lived in the twelfth century and died about 1160.

Although data are not known their homeland and life, a legend says that at age 14 she retired to a cave on Mount Coscina and then another of Mount Pellegrino , near Palermo.

In the Middle Ages were devoted to various churches and was considered the protectress and patroness of Palermo.

Her remains were discovered July 15 Pope Urban VIII included it as a saint in the Martyrology .

Is invoked as a lawyer against the plague and earthquakes. The iconography is presented as a hermit or coated with Augustinian habit .

Its main attributes are: a crown of roses, in allusion to her name, and a crucifix and a skull for her asceticism.