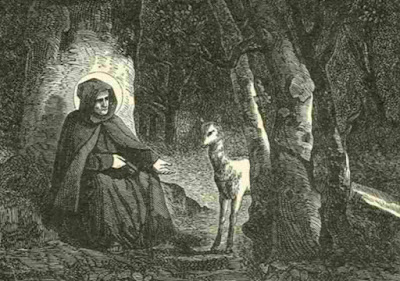 Giles first lived in retreats near the mouth of the Rhône and by the River Gard, in Septimania, today's southern France. The story that he was the son of King Theodore and Queen Pelagia of Athens is probably an embellishment of his early hagiographers; it was given wide currency in the Legenda Aurea. The two main incidents in his life were often depicted in art.

The Miracle of Saint Giles
His early history, as given in Legenda Aurea (Golden Legend), links him with Arles, but finally he withdrew deep into the forest near Nîmes, where in the greatest solitude he spent many years, his sole companion being a deer, or Red Deer, who in some stories sustained him on her milk. This last retreat was finally discovered by the king's hunters, who had pursued the hind to its place of refuge. An arrow shot at the deer wounded the saint instead, who afterwards became a patron of cripples. The king, who by legend was Wamba, an anachronistic Visigoth, but who must have been (at least in the original story) a Frank due to the historical setting, conceived a high esteem for the hermit, whose humility rejected all honors save some disciples, and built him a monastery in his valley, Saint-Gilles-du-Gard, which he placed under the Benedictine rule. Here Giles died in the early part of the eighth century, with the highest repute for sanctity and miracles

The Mass of Saint Giles
An early source, a tenth-century Vita sancti Aegidii recounts that, as Giles was celebrating mass to pardon the emperor Charlemagne's sins, an angel deposited upon the altar a letter outlining a sin so terrible Charlemagne had never dared confess it. Several Latin and French texts, including Legenda Aurea refer to this hidden "sin of Charlemagne".

A later text, the "Liber miraculorum sancti Aegidii" ("The Book of miracles of Saint Giles") served to reinforce the flow of pilgrims to the abbey.
Animals healer. Monk September 1. spoke to animals St. Giles