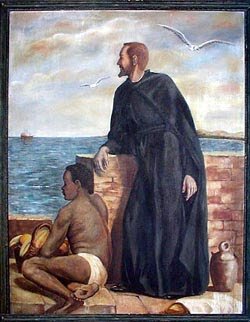 Peter Claver was born into a prosperous farming family in the Spanish village of Verdu, about 54 miles from Barcelona, in 1580, about 70 years after King Ferdinand of Spain had set in motion the brutal colonial slavery culture by authorizing the purchase of 250 African slaves in Lisbon for his territories in New Spain. His parents were devout Catholics and taught Peter from early childhood to let nothing come between him and the love of God. As a student at the University of Barcelona, Claver was noted for his piety as well as high intelligence. He was given permission to enter the Jesuit College at Palma, Majorca in 1602, and after two years of study there, he wrote these words in a notebook which he kept with him throughout his life, "I must dedicate myself to the service of God until death, on the understanding that I am like a slave." He was respected by his instructors for his, "humility and obedience, silence and reserve."

Claver arrived in Cartagena in 1610. By this time the slave trade had been established in the Americas for about 100 years and Cartagena was a chief center for it. Ten thousand slaves poured into the port yearly; crossing the Atlantic from West Africa under conditions so foul and inhuman that an estimated one-third of them died in transit. Although slave-trading was condemned by Pope Paul III and later labeled "supreme villainy" by Pius IX, there were fortunes to be made and it continued to flourish.

Peter Claver's predecessor, Jesuit Father Alfonso de Sandoval, had devoted himself to the service of the slaves for 40 years before Claver arrived to continue the work - declaring himself, "the slave of the slaves forever."

As soon as a slave ship entered the port, Claver headed for the wharf and moved into its filthy and diseased hold to doctor and minister to the ill-treated and miserable human cargo. After the slaves were herded from the ship and penned in nearby yards to be studied by crowds and buyers, Claver plunged in among them with medicines, food, bread, brandy, lemons and tobacco. With the help of interpreters and pictures which he carried with him he gave basic instructions and assured his brothers and sisters in Christ of their human dignity and God's saving love. During the 40 years of his ministry, Claver single handedly catechized and baptized an estimated 300,000 of these slaves. Furthermore, Claver followed up to see that as Christians they were accorded their legal rights.

His apostolate extended beyond his care for slaves. He preached in the city square, gave missions to sailors and traders as well as country missions - returning every spring to visit those he'd baptized and to follow up that they were being treated humanely. During these missions he avoided, whenever possible, the hospitality of the planters and overseers, and would lodge instead in the slave quarters. Through the force of his own extraordinary personality and saintliness, applied over many years, the state of the slaves began to improve.

His work on behalf of the slaves did not prevent him from caring also for the souls of the more well-to-do members of society and for the traders and visitors (including Moslems and English Protestants) to Cartagena, or for condemned criminals, many of whom he prepared for death. He was also a frequent visitor to the city's hospitals. Over time he became a moral force, indeed, the apostle of Cartagena.

Illness finally forced the saint into his room, where he lingered another four years, largely forgotten and neglected. He died on 8 September 1654. The city magistrates, who had generally considered him a nuisance for his constant solicitations on behalf of the slaves, ordered a public funeral, at public expense, and he was buried with great pomp and ceremony. It was only after his death that the true scope of his work began to be realized - which was extensive even before the astronomical number of people he personally baptized is considered. Miracles, prophecies, the gift of reading hearts, and the practice of severe personal penance were all ascribed to him.

He was canonized in 1888, and Pope Leo XIII declared him the worldwide patron of missionary work among black slaves.

Comment: The Holy Spirit's might and power are manifested in the striking decisions and bold actions of Peter Claver. A decision to leave one's homeland never to return reveals a gigantic act of will difficult for the contemporary mind to imagine. Peter's determination to serve forever the most abused, rejected and lowly of all people is stunningly heroic. When we measure our lives against such a man's, we become aware of our own barely used potential and of our need to open ourselves more to the jolting power of Jesus' Spirit. Quote: Peter Claver understood that concrete service like the distributing of medicine, food or brandy to his black brothers and sisters could be as effective a communication of the word of God as mere verbal preaching. As Peter Claver often said, "We must speak to them with our hands before we try to speak to them with our lips."
African Slaves Black people Colombian Slaves Dark Skinned people Jesuit Missionary September 9. St. Peter Claver