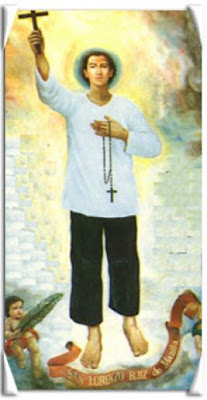 DOMINGO Domingo Ibanez , Spanish, Dominican priest . Born in Reginato (San Sebastian ), son of the Province of Spain to his affiliation with the Rosary Province . In Manila teaches at the College of St. Thomas and preach the Gospel in different parts of the Philippines . Went to Japan in 1623, where he worked incognito . Denounced by a Christian apostate is imprisoned and executed. Played an important role as the Vicar Provincial of the mission. It retains some of his letters. Age , 44.

FRANCISCO SHOYEMON , Japanese, cooperator Dominican . Companion of Fr Domingo Ibanez . Arrested in 1633, the Dominican habit in jail. He was killed alongside his spiritual father.

SANTIAGO KYUSHEI Tomonaga DE SANTA MARIA , Japanese, Dominican priest . family noble Christian Kyudetsu studying with the Jesuits in Nagasaki. Expelled from Japan in 1614 as a catechist. In Manila became a priest , a missionary in Taiwan , returns to his homeland in 1632 , in order to help their fellow Christians. He is arrested and tortured, killed, "because religious and propagated the faith " . It is the oldest of the group: 51.

MIGUEL KUROBIOYE , Japanese , lay catechist. Companion of Fr Santa Maria , OP, is imprisoned and tortured, he revealed the hiding place of P. of Santa Maria. Repentant, goes with him to martyrdom , confessing their faith.

LUCAS ALONSO DEI . SPIRIT HOLY , Spanish, Dominican priest . Born in Carracedo (Astorga ) , a Dominican of the Province of Spain , passed the Rosary Province in 1617. Professor at the Colegio de Santo Tomas in Manila , missionary Cagayan in 1623 went to Japan where he worked with great courage and risked their lives for ten years. Arrested in Osaka in 1633 , was tortured and martyred in Nagasaki. Age , 39.

MATEO KOHIOYE DEL ROSARIO , Japanese , born in Arima. Catechist and assistant B. Lucas Alonso, a novice of the Order. Arrested in Osaka in 1633 , rejects any proposal for money and endured horrible torture and remain faithful to Christ until his death. He was 18 .

MAGDALENA DE NAGASAKI , Japanese, tertiary Augustinian and Dominican . Daughter of martyred Christians , is devoted to God and spiritually guided by the Augustinian Recollect and then the Dominican Ansalone . After the arrest of Father Ansalone , she presented to the emergency proclaimed Christian . Tortured in a cruel, firm in her faith , is hung from the gallows where he remained alive for thirteen days.

NAVY OMURA , Japan. In 1626 he joined the Dominican Third Order , being a great help to the missionaries. Arrested in 1634 and submitted to shameful humiliation and finally led to the stake , giving a sublime example of "strong woman . "

JACINTO JORDAN Ansalon , Italian, Dominican priest . Native S. Stefano Quisquina (Agrigento ), son of the Province of Sicily, passed to the Holy Rosary Province . In the Philippines , he worked among the poor and sick . In 1632 he went to Japan , where he worked for two years. Arrested in 1634 , supports strongly torture, and is hung from the gallows. Age , 36 years.

THOMAS HIOJI NISHI DE SAN JACINTO , Japanese, Dominican priest . Son of martyred Christians of Hirado , and pupil of the Jesuits' College . Expelled from their country by persecution, emigrated to Manila in 1614 . Student at the College of St. Thomas , moved to missions Taiwan , returning later to his homeland in full religious persecution. Among great perils for five years. Arrested , tortured and sentenced to death. Age , 44.

In 1636 the Dominicans in Manila organized an expedition of volunteers to help Christians in Japan. When they reached the island of Okinawa were arrested and kept in prison more than a year before being transferred and sentenced to death by the tribunal of Nagasaki. They are:

ANTONIO GONZALEZ , Spanish, Dominican priest . Natural de León , is a Dominican in the Province of Spain and then passed to the Holy Rosary Province and moved to Manila in 1631 , where he will be professor and rector of St. Thomas , being a man of much prayer and penance. In 1636 a group of missionaries to Japan , where he is promptly arrested and dies in jail after a year , worn out by the tortures . Age, 45 years.

WILLIAM Courtet or TAKE S. SUNDAY, French Dominican priest . Born in Sérignan (Montpellier ) , family noble , he became a Dominican in the Congregation Reformed of San Luis, goes to the Holy Rosary Province and moved to the Philippines, in 1634 , where he is professor at the Colegio de Santo Tomás. In Japan died from torture singing praise to the Virgin of the Rosary , reciting psalms. Age , 47.

MIGUEL DE AOZARAZA , Spanish, Dominican priest . Natural Oñate ( Guipúzcoa ), enter as a Dominican in the province of Spain and then passed to the Holy Rosary Province . In the Philippines working at Mission Bataan ( Luzon) . He refused to give his faith and accepted with joy tremendous suffering. Age , 39.

VICENTE SCHIWOZUKA DE LA CRUZ, Japanese, Dominican priest . family Christian , a pupil of the Jesuits' College and a catechist. In 1614 he was expelled from Japan for being a Christian . In Manila became a priest and worked among the Japanese exiles . Before returning to his homeland with the P. Gonzalez, the Dominican habit in 1636. After a year in prison and tortured him to apostatize , but he soon goes to the classmates road gallows , professing their faith.

LAZARUS OF KYOTO, Japan , secular . He contracted leprosy and was deported with other lepers in the Philippines. In 1636 he joined as a guide and interpreter Fr Gonzalez, not withstanding torture, deny for a few hours but then repented and died for Christ with others.

Lorenzo Ruiz , Filipino, layman. Born in Binondo (Manila ) Chinese father and Filipino mother . Educated by the Dominicans and assistant their , becoming a member of the Confraternity of the Rosary. He married and fathered three children. Involved in a dark bloody event , joined the group P. Order to escape. He was arrested and declared himself ready to give life a thousand times by Christ. It is the first martyr of the Philippines.

Occurred in Manila in 1983 through the group in favor of Cecilia Alegria Policarpio , child of two years, cured completely and permanently cerebral palsy anatomical and functional , with no effective therapy. The miracle was recognized by Pope John Paul II on June 1, 1987 .

The reasons for the pursuers

" The followers of Christ , arriving unexpectedly in Japan, not only came here carrying goods on their ships, but also, without permission, have spread and propagated their wicked law , destroying the good and legitimate, and plotting to overthrow the power in our country. This is the beginning of a great calamity, which all means be avoided . Japan is a country Shinto and Buddhist , which venerates the gods , honor the Buddha and is held in high esteem the way of benevolence '( Confucius).

The followers of the Fathers ( the Christians) have all disobeyed the orders given by the government despising religion ... and destroying the good . Seeing those who should be killed ( martyrs ) are happy and are behind them, spontaneously, and adore them . Such is the supreme ideal of this religion. If it is suppressed immediately endless misfortunes will fall on the state. These Christians are wiped out without delay in all regions of Japan , so you no have place to put your feet or hands. If anyone dares contravene this order , shall be punished with death. " (From the edict of 1614, whose doctrine is picked up substantially in 1633 and 1636).
Dominicans Japan Japanese martyrs Martyrs of Japan Philippines Saints September 28 St. Lorenzo Ruiz and Companions