Our Lady of Sorrow 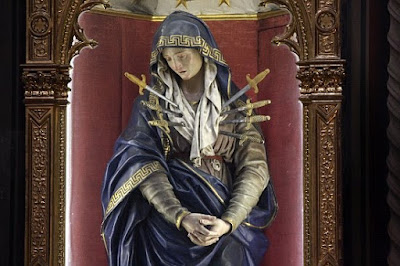 This excerpt from a sermon by St. Bernard of Clairvaux (Sermo in dom. infra oct. Assumptionis, 14-15: Opera omnia, Edit. Cisterc. 5 [1968}, 273-274) is used in the Roman Office of Readings for the Feast of Our Lady of Sorrows on September 15. It speaks of the martyrdom of the Virgin at the foot of the cross--her heart is pierced by a sword as Simeon predicted as her Son's body is pierced by nails and spear.

The martyrdom of the Virgin is set forth both in the prophecy of Simeon and in the actual story of our Lord’s passion. The holy old man said of the infant Jesus: He has been established as a sign which will be contradicted. He went on to say to Mary: And your own heart will be pierced by a sword.


Truly, O blessed Mother, a sword has pierced your heart. For only by passing through your heart could the sword enter the flesh of your Son. Indeed, after your Jesus - who belongs to everyone, but is especially yours - gave up his life, the cruel spear, which was not withheld from his lifeless body, tore open his side. Clearly it did not touch his soul and could not harm him, but it did pierce your heart. For surely his soul was no longer there, but yours could not be torn away. Thus the violence of sorrow has cut through your heart, and we rightly call you more than martyr, since the effect of compassion in you has gone beyond the endurance of physical suffering.


Or were those words, Woman, behold your Son, not more than a word to you, truly piercing your heart, cutting through to the division between soul and spirit? What an exchange! John is given to you in place of Jesus, the servant in place of the Lord, the disciple in place of the master; the son of Zebedee replaces the Son of God, a mere man replaces God himself. How could these words not pierce your most loving heart, when the mere remembrance of them breaks ours, hearts of iron and stone though they are!


Do not be surprised, brothers, that Mary is said to be a martyr in spirit. Let him be surprised who does not remember the words of Paul, that one of the greatest crimes of the Gentiles was that they were without love. That was far from the heart of Mary; let it be far from her servants.


Perhaps someone will say: “Had she not known before that he would not die?” Undoubtedly. “Did she not expect him to rise again at once?” Surely. “And still she grieved over her crucified Son?” Intensely. Who are you and what is the source of your wisdom that you are more surprised at the compassion of Mary than at the passion of Mary’s Son? For if he could die in body, could she not die with him in spirit? He died in body through a love greater than anyone had known. She died in spirit through a love unlike any other since his.
Marian Apparition Marian Feastday September 15.