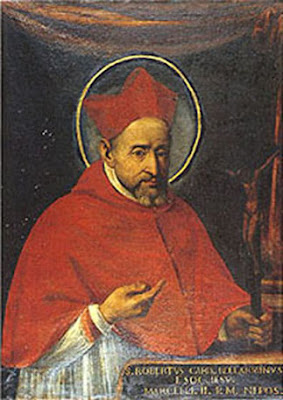 Saint Robert Bellarmine was the first Jesuit priest to develop the theory of the indirect power of the Pope in temporary affairs. He all but eliminated the Divine-Rights-of-Kings untenable principle that had been in existence many years before we worked at the Vatican.

He described and explained the head of hell-Satan and his cohorts. The titles of Gentle Doctor of The Controversies, one of his more notable writings, and the title "Prince of Apologists" are two of the most known names that identify him.

Robert is the Doctor of Church, State and Country Relations. The pope made him a Cardinal and insisted on having him by his side as his personal theologian. The more he stepped down, the more God raised this humble priest up with greater responsibilities at the Vatican.

This brilliant Jesuit lived in an age of great deflection within the church amidst religious controversy. His writings, intelligence, and character served the church at a time that was most needed.

Diplomats, ambassadors, heads of state, government officials and top church decision-makers and ministers can learn much from Robert. He had major responsibilities and used it properly for the development and growth of the church, states and countries. The more authority one exercises, the more divine guidance one needs to serve others in a Christian manner. Plead with St Bellarmine to gain wisdom and discernment leading others and supporting your country. You will definitely receive strength and insight to handle sensitive issues that could affect your church, state and country.

Patriotism is a virtue. It is not only a virtue that displays love for country but also supports the authority and interest of country. Many have died defending our independence, liberty and freedom. We can defend and honor our country and its citizens by upholding everything that makes us free. However, in God's work of salvation, which means freedom from sin, a Christian patriot is one who stands up for any cause which promotes justice, equality and human dignity. That is what St Robert Bellarmine advocated and defended. Saints tell us that there are other battles going on in life. We are Christian protectors and defenders fighting for spiritual values as well as in the armed forces defending our country against oppressors and war. Hopefully, as humankind grows in spiritual perspectives, our struggles are going to be more socially, educationally and mentally rather then physically with forces and arms for war. However, we must be prepared to go to war and fight to defend freedom and destroyers of humanity and offenders of life, liberty and the pursuit of happiness.

Teachers, and anyone who assist others in any social or instructional manner, Saint Robert is a model for you too. He started his career in this manner and he guided children through the church's catechism of his day. In fact he is a patron of catechetical studies along with St Cyril of Jerusalem, the Doctor of Catechesis, and St Peter Canisius, another Jesuit, who is the Doctor of the Catechism. Both doctors are etched in stone on the exterior east side of the Shrine of the Immaculate Conception Basilica in Washington DC. The only other Jesuit Doctor of the Church beside Rogert is listed below.
Bishop cardinal Confessor. Doctor of the Church September 17 St. Robert Bellarmine