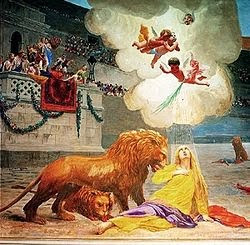 St. Euphemia was the daughter of a respectable man of Chalcedon , near Constantinople. At the time of Diocletian , was captured, tortured and finally thrown to the lions. Usually it is represented with the palm of martyrdom , the wheel and beside it, one or more lions.

Devout Christians recovered his body and took him to Constantinople where the Emperor Constantine had built a church in her honor. His sarcophagus remained there until they reached the iconoclasts , at 800 . According to tradition, a stormy night , the coffin disappeared from Constantinople, and July 13 of 800 reached the coast of Rovinj. He was picked up by a young man who , by dragging it with the help of two horses , took him to the church of San Francisco. The appearance of the sarcophagus was considered miraculous , so that people began to venerate the saint as their patron saint .

The sarcophagus dates from the third century, is of marble, but is not finished. Has about 208 cm . long, 195 cm. high and 95 cm wide. Inside are kept the bones of the saint, wrapped in fine cloth of gold .

Santa Eufemia was martyred in Chalcedon. The exact date of his martyrdom seems to have been on 16 September 303. The Council of Chalcedon was very influential in spreading the cult of this saint data . Since then, his party was gradually extended throughout Christendom , and many churches were dedicated to him .

Was declared protector of Orthodoxy

This festival set in the West in the Martyrology Geronimiano ( cf. Comm. Martyr. Hieron. , pp. 368, 380) in marbling Calendar of Naples ( ed. D. Mallard , Rome 1947, pp. 23, 162), and East, appears on all calendars. The Sinasario Costantinopolitano ( coll, 811-13 ) has a very special miracle , which is recalled in this event : the two professions of faith , the Orthodox and euquiana , were placed on the breast of the saint in his tomb. After a few days , reopened the tomb had been properly sealed, the text was found heretical in the feet of the martyr, while the Orthodox were in their hands.

No shortage of texts on the saint before the council, who can enjoy a higher credit, not only be older but not to be marked by the enthusiastic devotion to the triumph of orthodoxy of Chalcedon threw them to the martyr.

The relics of St. Euphemia are preserved in the Duomo d' Istria Rovinj ( Croazia ).